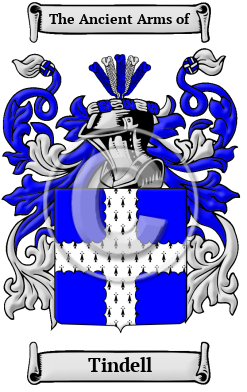 The surname Tindell originated in or near Tynedale, the valley of the river Tyne, or in a place called Tindale, in Cumberland. Tindell is a local surname, which belongs to the category of hereditary surnames. There are a variety of types of local surnames, some of which include: topographic surnames, which could be given to a person who lived beside any physical feature, such as a hill, stream, church or type of tree. Habitation names form the other broad category of surnames that were derived from place-names. They were derived from pre-existing names for towns, villages, parishes, or farmsteads. Other local names are derived from the names of houses, manors, estates, regions, and entire counties. In this case, the surname Tindell derived from the Celtic word tina, which means to flow. This was commonly adopted as a river name. The second component of the surname comes from the Old English word dæl, which means valley. Thus, the surname Tindell referred to one who lived in the valley of the river named Tyne. The earliest records of this surname indicated that members of the Tindell family resided in Northumberland, along the banks of the River Tyne.

Early Origins of the Tindell family

The surname Tindell was first found in Northumberland, where Tindale is an extensive ward or district which includes the Dale of Tyne. "The great Border family so called had their chief seat at Langley, near Haydon Bridge, and were styled in charters of temp. Henry II." [1]

Langley Castle originally held by the Barons of Tynedale and from them descend the Tyndall family. The parish of Warden in Northumberland was home to another branch of the family. "The manor and church, in 1298, belonged to the monks of Hexham, to whom they had been granted, according to the record, 'from a time beyond all memory,' by Adam de Tyndale." [2]

We found two people name Adam de Tyndale in our search. The first was born in 1155 and died in 1192 and his son was born in 1185 and died in 1233. One of these gentlemen is also believed to have founded a Benedictine nunnery, dedicated to God, St. Mary, and St. Patrick in Lambley, Northumberland. Another early record of the family was Adam de Tindal who was listed in the Pipe Rolls of Northumberland in 1165. [3]

Early History of the Tindell family

Notable among the family at this time was William Tyndale (c.1494-1536), Protestant reformer and scholar who is best known for his Tyndale Bible, eponym of the Tyndale Monument, North Nibley, Gloucestershire; Dr. Matthew Tindal, (1657-1733), an eminent English deist author; and his nephew, Nicolas Tindal (1687-1774), the English translator and continuer of the History of England by Paul de Rapin...
Another 60 words (4 lines of text) are included under the topic Early Tindell Notables in all our PDF Extended History products and printed products wherever possible.

In the United States, the name Tindell is the 10,837th most popular surname with an estimated 2,487 people with that name. [5]

Migration of the Tindell family to Ireland

Some of the Tindell family moved to Ireland, but this topic is not covered in this excerpt.
Another 103 words (7 lines of text) about their life in Ireland is included in all our PDF Extended History products and printed products wherever possible.

Tindell migration to the United States +

Tindell Settlers in United States in the 19th Century

Tindell Settlers in Australia in the 19th Century