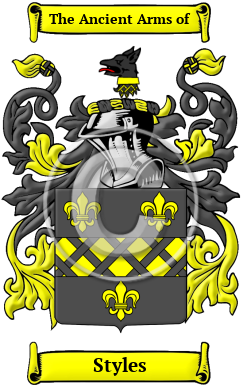 The present generation of the Styles family is only the most recent to bear a name, whose roots date back to the ancient Anglo-Saxon culture of Britain. The surname is derived from the Old English "stigol," meaning "stile, steep ascent," and refers to a "dweller by the stile." [1] [2] A stile is a set of steps over a stone wall or wooden fence allowing people to traverse, but prevents animals from doing so.

Early Origins of the Styles family

The surname Styles was first found in Bedfordshire (Old English: Bedanfordscir), located in Southeast-central England, formerly part of the Anglo-Saxon kingdom of Mercia, where the family held a family seat in early times. The earliest known bearer of the name was Reginald atte Stighel, who was recorded in the Assize Rolls of 1227. The Styles family branched to other counties at an early date, also appearing in Somerset, where William de Stile and Osmund Atthe Stihele were living in 1229 and 1234 respectively, as well as in Sussex, where William ate Stegel was recorded in the Subsidy Rolls of 1296. [3]

Early History of the Styles family

Spelling variations in names were a common occurrence before English spelling was standardized a few hundred years ago. In the Middle Ages, even the literate spelled their names differently as the English language incorporated elements of French, Latin, and other European languages. Many variations of the name Styles have been found, including Stiles, Styals, Styles, Style, Stoyle, Steggle, Steagall, Steggal and many more.

Notables of this surname at this time include: Sir Thomas Style, 1st Baronet of Wateringbury, Kent; and his son, Sir Thomas Style, 2nd Baronet (1624-1702) was an English politician, Member of Parliament for Kent (1656-1659.) William Style (1603-1679), was an "English legal author, eldest son of William Style...
Another 47 words (3 lines of text) are included under the topic Early Styles Notables in all our PDF Extended History products and printed products wherever possible.

In the United States, the name Styles is the 3,987th most popular surname with an estimated 7,461 people with that name. [4]

Migration of the Styles family to Ireland

Some of the Styles family moved to Ireland, but this topic is not covered in this excerpt. More information about their life in Ireland is included in all our PDF Extended History products and printed products wherever possible.

Styles migration to the United States +

Families began migrating abroad in enormous numbers because of the political and religious discontent in England. Often faced with persecution and starvation in England, the possibilities of the New World attracted many English people. Although the ocean trips took many lives, those who did get to North America were instrumental in building the necessary groundwork for what would become for new powerful nations. Some of the first immigrants to cross the Atlantic and come to North America bore the name Styles, or a variant listed above:

Styles Settlers in United States in the 17th Century

Styles Settlers in United States in the 18th Century

Styles Settlers in United States in the 19th Century

Styles Settlers in Canada in the 18th Century

Styles Settlers in Canada in the 19th Century

Styles Settlers in Australia in the 19th Century

Styles Settlers in New Zealand in the 19th Century