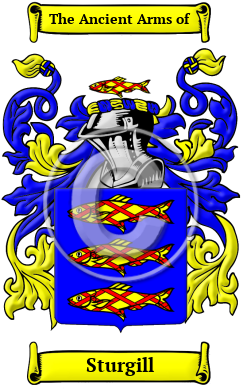 The ancient Normans that arrived in England following the Conquest of 1066 are the initial ancestors from which the many generations of the Sturgill family have grown. The name Sturgill was given to a member of the family who was a person who resembles a sturgeon having derived from the Old French word esturgeon, and indicates that the original bearer bore some fanciful resemblance to the Northern European fish of the same name. A broad and miscellaneous class of surnames, nickname surnames referred to a characteristic of the first person who used the name. They can describe the bearer's favored style of clothing, appearance, habits, or character.

Early Origins of the Sturgill family

The surname Sturgill was first found in Suffolk where they were Lords of the manor of Whepstead from very early times, where they were conjecturally descended from Ralph of Whepstead who held that Lordship after the Norman Conquest in 1066 A.D. from the Abbott of St. Edmund's. According to the Domesday Book survey, Whepstead consisted of a church, eighteen beasts, thirty pigs, and one hundred sheep, and their descendants later erected Manston Hall.

Early History of the Sturgill family

This web page shows only a small excerpt of our Sturgill research. Another 110 words (8 lines of text) covering the years 1544, 1636, 1661, 1655, 1657, 1659 and are included under the topic Early Sturgill History in all our PDF Extended History products and printed products wherever possible.

Before English spelling was standardized a few hundred years ago, spelling variations of names were a common occurrence. Elements of Latin, Norman French and other languages became incorporated into English throughout the Middle Ages, and name spellings changed even among the literate. The variations of the surname Sturgill include Sturgen, Sturgeon, Stergeon, Sturgion, Sturgione, Strugeon, Strugen, Strugeone and many more.

Outstanding amongst the family at this time was John Sturgion (fl. 1661), English pamphleteer who was at one time a private in Cromwell's lifeguards. "On 27 Aug. 1655 he was arrested as the author of a pamphlet against the Protector, called 'A Short Discovery of his Highness the Lord Protector's Intentions touching the Anabaptists in the Army'. He was...
Another 59 words (4 lines of text) are included under the topic Early Sturgill Notables in all our PDF Extended History products and printed products wherever possible.

In the United States, the name Sturgill is the 3,729th most popular surname with an estimated 7,461 people with that name. [1]

Migration of the Sturgill family to Ireland

Some of the Sturgill family moved to Ireland, but this topic is not covered in this excerpt.
Another 51 words (4 lines of text) about their life in Ireland is included in all our PDF Extended History products and printed products wherever possible.

Sturgill migration to the United States +

In England at this time, the uncertainty of the political and religious environment of the time caused many families to board ships for distant British colonies in the hopes of finding land and opportunity, and escaping persecution. The voyages were expensive, crowded, and difficult, though, and many arrived in North America sick, starved, and destitute. Those who did make it, however, were greeted with greater opportunities and freedoms that they could have experienced at home. Many of those families went on to make important contributions to the young nations in which they settled. Early immigration records have shown some of the first Sturgills to arrive on North American shores:

Sturgill Settlers in United States in the 20th Century