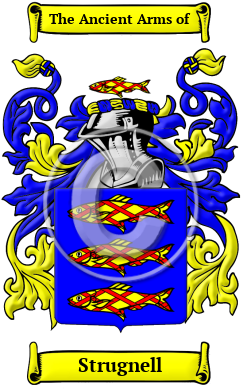 The name Strugnell has a history dating as far back as the Norman Conquest of England in 1066 when the culture from which this family sprang arrived on British soil. It was a name for a person who resembles a sturgeon having derived from the Old French word esturgeon, and indicates that the original bearer bore some fanciful resemblance to the Northern European fish of the same name. A broad and miscellaneous class of surnames, nickname surnames referred to a characteristic of the first person who used the name. They can describe the bearer's favored style of clothing, appearance, habits, or character.

Early Origins of the Strugnell family

The surname Strugnell was first found in Suffolk where they were Lords of the manor of Whepstead from very early times, where they were conjecturally descended from Ralph of Whepstead who held that Lordship after the Norman Conquest in 1066 A.D. from the Abbott of St. Edmund's. According to the Domesday Book survey, Whepstead consisted of a church, eighteen beasts, thirty pigs, and one hundred sheep, and their descendants later erected Manston Hall.

Early History of the Strugnell family

This web page shows only a small excerpt of our Strugnell research. Another 110 words (8 lines of text) covering the years 1544, 1636, 1661, 1655, 1657, 1659 and are included under the topic Early Strugnell History in all our PDF Extended History products and printed products wherever possible.

Norman surnames are characterized by a multitude of spelling variations. The frequent changes in surnames are largely due to the fact that the Old and Middle English languages lacked definite spelling rules. The introduction of Norman French to England, as well as the official court languages of Latin and French, also had pronounced influences on the spelling of surnames. Since medieval scribes and church officials recorded names as they sounded, rather than adhering to any specific spelling rules, it was common to find the same individual referred to with different spellings. The name has been spelled Sturgen, Sturgeon, Stergeon, Sturgion, Sturgione, Strugeon, Strugen, Strugeone and many more.

Outstanding amongst the family at this time was John Sturgion (fl. 1661), English pamphleteer who was at one time a private in Cromwell's lifeguards. "On 27 Aug. 1655 he was arrested as the author of a pamphlet against the Protector, called 'A Short Discovery of his Highness the Lord Protector's Intentions touching the Anabaptists in the Army'. He was...
Another 59 words (4 lines of text) are included under the topic Early Strugnell Notables in all our PDF Extended History products and printed products wherever possible.

Migration of the Strugnell family to Ireland

Some of the Strugnell family moved to Ireland, but this topic is not covered in this excerpt.
Another 51 words (4 lines of text) about their life in Ireland is included in all our PDF Extended History products and printed products wherever possible.

Strugnell Settlers in Australia in the 19th Century

Historic Events for the Strugnell family +