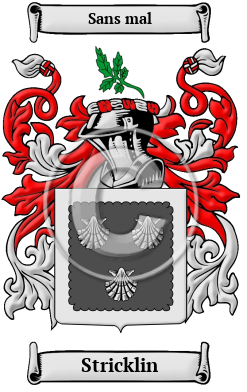 Stricklin is one of the thousands of new names that the Norman Conquest brought to England in 1066. The Stricklin family lived in Westmorland, at Great Strickland, a township in the parish of Morland, West ward and union. "This place takes its name from the ancient family of Strickland, who were lords of the manor, and resided here. " [1]

Little Strickland is "a township, in the chapelry of Thrimby, parish of Morland, West ward and union, county of Westmorland, 3 miles (N. E.) from Shap." [1]

Early Origins of the Stricklin family

The surname Stricklin was first found in Westmorland at Great Strickland or Little Strickland which dates back to the 12th century when it was named Stircland of Stirkland. [2] [3] The name is derived from the Old English words "stirc" + "land" and meant "cultivated land where young bullocks are kept." [4]

Strickland-Ketel and Strickland-Roger were located in the same county. "Descended from Walter de Stirkland, Knight, so called from the pasture-ground of the young cattle, called stirks or steers, in the parish of Morland, in this county; who was living in the reign of Henry III." [5]

The first record of the family was found here in the Pipe Rolls of 1193 where Vchtred de Stirclanda was listed. Later, William de Strikeland was listed in 1278 and later again, Walter

Strykland was listed in the Assize Rolls for London in 1442. [6]

However, some of the family branched to Wintringham in East Riding of Yorkshire in early times. "This parish is situated on the river Derwent, and comprises 8480 acres, of which 5740 are in the township, and, with the exception of the large farm of Linton, exclusively the property of Sir George Strickland, Bart., who is lord of the manor. The living is a donative, in the patronage of Sir George Strickland: the church is in the early English style, with a square embattled tower surmounted by a tall and graceful spire." [1]

Further to the north in Scotland, "Robert de Strikland witnessed confirmation by Alexander filius Walteri of his father's gifts to the church of Paisley, 1239 and Robert de Stirkeland had protection for two years for going on the king of England's service beyond seas, 1370." [7]

Early History of the Stricklin family

Multitudes of spelling variations are a hallmark of Anglo Norman names. Most of these names evolved in the 11th and 12th century, in the time after the Normans introduced their own Norman French language into a country where Old and Middle English had no spelling rules and the languages of the court were French and Latin. To make matters worse, medieval scribes spelled words according to sound, so names frequently appeared differently in the various documents in which they were recorded. The name was spelled Strickland, Stirkland, Stickland and others.

In the United States, the name Stricklin is the 4,983rd most popular surname with an estimated 4,974 people with that name. [8]

Stricklin migration to the United States +

Because of this political and religious unrest within English society, many people decided to immigrate to the colonies. Families left for Ireland, North America, and Australia in enormous numbers, traveling at high cost in extremely inhospitable conditions. The New World in particular was a desirable destination, but the long voyage caused many to arrive sick and starving. Those who made it, though, were welcomed by opportunities far greater than they had known at home in England. Many of these families went on to make important contributions to the emerging nations of Canada and the United States. Analysis of immigration records indicates that some of the first North American immigrants bore the name Stricklin or a variant listed above:

Stricklin Settlers in United States in the 20th Century