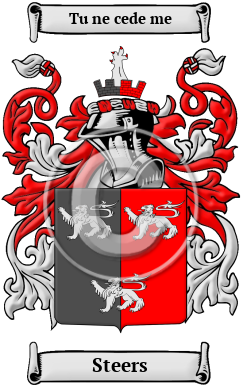 Early Origins of the Steers family

The surname Steers was first found in Surrey where Styr was a Lord at the Court of Ethelred the II mentioned in Royal Letters Patent and also mentioned in King Hardicanute's reign. Styr was recorded as the ancestor of Steer, the word "Styr" was an Anglo-Saxon word for "battle" and not to be confused with steer, the animal. Steart, also called Stert, is a small village in Somerset, England. Geoffrey Ster was listed in the Pipe Rolls of Worcestershire in 1209 and later, Robert le Steer was listed in the Subsidy Rolls of Sussex in 1296. [1] The Yorkshire Poll Tax Rolls of 1379 list Willelmus Stere and Johannes Stere as residing there and holding lands at that time. [2] "The Steers or Steeres were a Newdegate family of gentry of the 17th and 18th centuries; and one of the members was rector of Newdegate from 1610 to 1660. The Steeres of Wootton parish in the 17th century were evidently connected with them, and a hundred years ago, Lee Steere, Esq., of Jayes, Wootton, owned property in Newdegate." [3]

Early History of the Steers family

Distinguished members of the family include Richard Steere (1643-1721), English-born immigrant to America from Chertsey, Surrey who became a colonial American merchant and poet; and Thomas Steers...
Another 26 words (2 lines of text) are included under the topic Early Steers Notables in all our PDF Extended History products and printed products wherever possible.

Migration of the Steers family to Ireland

Some of the Steers family moved to Ireland, but this topic is not covered in this excerpt. More information about their life in Ireland is included in all our PDF Extended History products and printed products wherever possible.

Steers migration to the United States +

Steers Settlers in United States in the 17th Century

Steers Settlers in United States in the 18th Century

Steers Settlers in Canada in the 20th Century

Steers Settlers in Australia in the 19th Century

Steers Settlers in New Zealand in the 19th Century