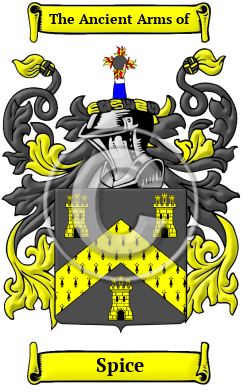 The vast movement of people that followed the Norman Conquest of England of 1066 brought the Spice family name to the British Isles. Spice is a name for a grocer which was in turn derived from the Old French word espice, of the same meaning. [1] [2]

"What we now call a grocer, because, inter alia, he deals in figs (grossi), the French call an epicier, or spicer, because he sells spices." [3]

Early Origins of the Spice family

The surname Spice was first found in Devon where conjecturally the Spicers were under tenants of the Count of Mortain at the time of the Norman Conquest. Benedict le Spicer was listed in the Rotuli de Oblatis et Finibus, at the time of King John. [4]

A search of the Hundredorum Rolls of 1273 revealed: Simon le Spicere, Cambridgeshire; William le Spicere, Oxfordshire; and William Speciar, Lincolnshire. Up in the north of England, the Yorkshire Poll Tax Rolls of 1379 show the name as both a trade name and a surname: Adam Spisar, spicer; and Giliaum Spyser, 1379. [6]

Continuing our quest north into Scotland, the name had the same meaning "spicer, dealer in spices," and two early entries, both as a result of the invasion of King Edward I of England: "Rauf le Spicer rendered homage, 1296, and Eustace Lespicer and Martin Lespicer rendered homage at Berwick, 1291." [7]

Early History of the Spice family

Norman surnames are characterized by a multitude of spelling variations. The frequent changes in surnames are largely due to the fact that the Old and Middle English languages lacked definite spelling rules. The introduction of Norman French to England, as well as the official court languages of Latin and French, also had pronounced influences on the spelling of surnames. Since medieval scribes and church officials recorded names as they sounded, rather than adhering to any specific spelling rules, it was common to find the same individual referred to with different spellings. The name has been spelled Spicer, Spicers, Spice and others.

Outstanding amongst the family at this time was Henry Spicer (1743?-1804), English miniature-painter, born at Reepham, Norfolk, about 1743, and became a pupil of Gervase Spencer. He worked both on ivory and in enamel, and was one of the ablest miniaturists of the period. He was a member of the Incorporated Society of Artists, and exhibited with them from 1765 to 1783; in 1773 he was secretary to the society. He exhibited for the first time at the Royal Academy in 1774...
Another 82 words (6 lines of text) are included under the topic Early Spice Notables in all our PDF Extended History products and printed products wherever possible.

Migration of the Spice family to Ireland

Some of the Spice family moved to Ireland, but this topic is not covered in this excerpt. More information about their life in Ireland is included in all our PDF Extended History products and printed products wherever possible.

Spice migration to the United States +

Many English families emigrated to North American colonies in order to escape the political chaos in Britain at this time. Unfortunately, many English families made the trip to the New World under extremely harsh conditions. Overcrowding on the ships caused the majority of the immigrants to arrive diseased, famished, and destitute from the long journey across the stormy Atlantic. Despite these hardships, many of the families prospered and went on to make invaluable contributions to the development of the cultures of the United States and Canada. Early North American immigration records have revealed a number of people bearing the name Spice or a variant listed above:

Spice Settlers in United States in the 17th Century

Spice Settlers in United States in the 19th Century

Spice Settlers in Australia in the 19th Century