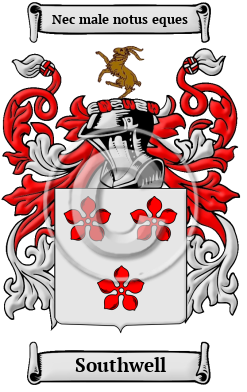 Southwell is a name whose history is connected to the ancient Anglo-Saxon tribes of Britain. The name is derived from when the Southwell family once lived in the parish of Southwell found in the county of Nottingham.

Early Origins of the Southwell family

The surname Southwell was first found in Nottinghamshire where "the family are of great antiquity as lords of Southwell, till the reign of Henry VI. They afterwards settled in Norfolk and Suffolk, whence the ancestor of Viscount Southwell removed to Ireland temp. James I." [1]

Woodrising, Norfolk was an ancient family seat. "The manor was formerly the property of the Southwell family, of whom Sir Richard was chancellor to Edward VI., and Sir Robert secretary for Ireland in the reign of Charles II." [4]

Early History of the Southwell family

Sound was what guided spelling in the essentially pre-literate Middle Ages, so one person's name was often recorded under several variations during a single lifetime. Also, before the advent of the printing press and the first dictionaries, the English language was not standardized. Therefore, spelling variations were common, even among the names of the most literate people. Known variations of the Southwell family name include Southwell, Sothwell and others.

Notables of this surname at this time include: Sir Richard Southwell (1504-1564), English courtier, English Privy Councillor from Windham Manor, Norfolk. His grandfather, Sir Richard Southwell of Barham Hall, Suffolk, acquired Woodrising in Norfolk by his marriage with Amy, daughter and coheiress of Sir Edmund Wichingham. Richard, owing to the deaths of his father and uncle, was heir to great wealth. Robert Southwell (c. 1561-1595), also known as Saint Robert Southwell, an English Roman Catholic priest of the Jesuit Order, canonized by Pope Paul VI as one of the Forty Martyrs of England and Wales. He was third son of Richard...
Another 104 words (7 lines of text) are included under the topic Early Southwell Notables in all our PDF Extended History products and printed products wherever possible.

In the United States, the name Southwell is the 15,658th most popular surname with an estimated 2,487 people with that name. [5]

Migration of the Southwell family to Ireland

Some of the Southwell family moved to Ireland, but this topic is not covered in this excerpt.
Another 197 words (14 lines of text) about their life in Ireland is included in all our PDF Extended History products and printed products wherever possible.

Southwell migration to the United States +

For political, religious, and economic reasons, thousands of English families boarded ships for Ireland, Canada, the America colonies, and many of smaller tropical colonies in the hope of finding better lives abroad. Although the passage on the cramped, dank ships caused many to arrive in the New World diseased and starving, those families that survived the trip often went on to make valuable contributions to those new societies to which they arrived. Early immigrants bearing the Southwell surname or a spelling variation of the name include:

Southwell Settlers in United States in the 18th Century

Southwell Settlers in United States in the 19th Century

Southwell Settlers in Canada in the 19th Century

Southwell Settlers in Australia in the 19th Century

Historic Events for the Southwell family +