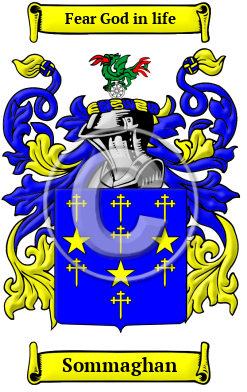 "In 1165 Walter de Summerville held a fief from the Earl of Derby, two from the barony of Stafford, and one in York, from De Lacy. His seat was at Whichnor in Staffordshire, held as a member of the Honour of Tutbury, and from him descended Roger de Somerville, who was summoned to parliament as a Baron, and died in 1327." [2]

Early Origins of the Sommaghan family

The surname Sommaghan was first found in Staffordshire, where "the progenitor of the noble family was Walter de Somerville, lord of Wicknor, and of Aston Somerville, in county Gloucester, who came into England with William the Conqueror, and left two sons, who became ancestors respectively of the English and Scottish Somervilles." [3] [4]

Another source has a slightly different understanding: "the name of the Norman was Sir Gualter de Somerville. He became Lord of Whichnour, county Stafford, and his descendants possessed considerable property, about the close of the 12th century, in the co. Lanark, and in other parts of Scotland; of whom William de Somerville was one of the barons appointed at the marriage of Alexander II. (whose reign commenced in 1214) to exercise in a tournament at the castle of Roxburgh. This William's descendant, James, thirteenth Lord Somerville, augmented his fortune considerably by an arrangement with his kinsman, William Somerville, Esq., of Eadstone, co. Warwick, and of Somerville-Aston, co. Gloucester. " [5]

Black notes that "William de Somerville, first of the name in Scotland, came in the train of David I, and received lands in Lanarkshire. There were five Williams in succession, the last dying in 1282. " [6]

Both of these scenarios could be true as David I of Scotland (1084-1153) was King of the Scots (1124-1153) and born 20 years after the Conquest. In Scotland, there are numerous early listings of the name in one form or another including: Robert de Sumeruilla who witnessed a charter by Duncan, Earl of Fife, to the nuns of North Berwick in 1177; Ralph de Sumervilla, acolyte, who was promoted to the church of Linton in 1255; and William Somerwele of the Plane, who was a charter witness in Edinburgh in 1492. [6]

"The castle of Cowthalley, in the parish [of Carwath, Lanarkshire, Scotland], was, for many years, the baronial residence of the Sommervilles, one of the most opulent and powerful families of the country in the 12th century, and of whom William, the first Baron, was the firm adherent of Robert Bruce, during the disputed succession to the crown." [7]

In England, Jacobus de Somerwill was listed in the Hundredorum Rolls of 1273 in Devon and Robert de Somervile and Roger de Somerville were both listed in Staffordshire during the reign of Edward I. [3]

An early branch of the family was found at Barton-Under-Needwood in Staffordshire. "[Barton-Under-Needwood] in Domesday Book called Bertune, gave name to one of the five wards into which the ancient royal forest of Needwood was divided. Edward the Confessor granted it to Henry de Ferrers, from whom it passed to the Somervilles, and afterwards to the earls of Derby, one of whom forfeited the property by rebellion in 1263." [8]

Early History of the Sommaghan family

Migration of the Sommaghan family to Ireland

Some of the Sommaghan family moved to Ireland, but this topic is not covered in this excerpt.
Another 65 words (5 lines of text) about their life in Ireland is included in all our PDF Extended History products and printed products wherever possible.

Migration of the Sommaghan family