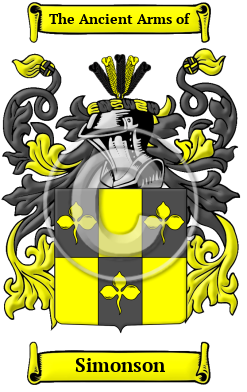 Early Origins of the Simonson family

The surname Simonson was first found in Devon and in Cornwall, where the family held a family seat since ancient times.

Early History of the Simonson family

Notable amongst the family at this time was John Symons, M.P. for Helston in 1388; Thomas Simon (c. 1623-1665), English medalist, born in Yorkshire who studied engraving under Nicholas Briot; Samuel Simmons (1640-1687), an English printer, best known as the first publisher of several works by John Milton; Abraham Simon (1617-1692?), an English medalist to the Royal Mint with his brother, Thomas Simon (c. 1623-1665); and Richard Symonds (1617-1692?), an English Royalist and antiquary, best known for his eye-witness diary of the events of the First English Civil War. Sir George Simeon was an English landowner and politician, Member of Parliament...
Another 114 words (8 lines of text) are included under the topic Early Simonson Notables in all our PDF Extended History products and printed products wherever possible.

In the United States, the name Simonson is the 4,062nd most popular surname with an estimated 7,461 people with that name. [2]

Migration of the Simonson family to Ireland

Some of the Simonson family moved to Ireland, but this topic is not covered in this excerpt.
Another 62 words (4 lines of text) about their life in Ireland is included in all our PDF Extended History products and printed products wherever possible.

Simonson migration to the United States +

An investigation of the immigration and passenger lists has revealed a number of people bearing the name Simonson:

Simonson Settlers in United States in the 17th Century

Simonson Settlers in United States in the 18th Century

Simonson Settlers in United States in the 19th Century

Simonson Settlers in Canada in the 18th Century