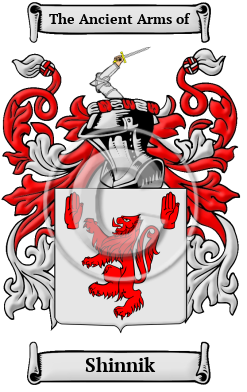 The Shinnik surname originally appeared in Gaelic as O Sionnaigh, which is derived from "sionnach," which means "fox."

Early Origins of the Shinnik family

The surname Shinnik was first found in County Mayo (Irish: Maigh Eo) located on the West coast of the Republic of Ireland in the province of Connacht, where they held a family seat. This most ancient Irish surname is derived from Sionnach, the Fox, an epithet used by the Chief of the Irish Cathernaigh Clann, a branch of the northern Ui Fiachrach.

Early History of the Shinnik family

This web page shows only a small excerpt of our Shinnik research. Another 98 words (7 lines of text) covering the years 184 and 1845 are included under the topic Early Shinnik History in all our PDF Extended History products and printed products wherever possible.

The recording of names in Ireland in the Middle Ages was an inconsistent endeavor at best. The many regional dialects and the predominate illiteracy would have made common surnames appear unrelated to the scribes of the period. Research into the name Shinnik revealed spelling variations, including Shiner, Shinner, Shunny, Shunagh, Shunnagh, Shinnick, Shinnock, Shinick and many more.

More information is included under the topic Early Shinnik Notables in all our PDF Extended History products and printed products wherever possible.

Migration of the Shinnik family

The 19th century saw a great wave of Irish migrating out of their homeland in a great measure due to the oppressive imperial policies of the English government and landowners. Many of these Irish families sailed to North America aboard overcrowded passenger ships. By far, the largest influx of Irish immigrants to North America occurred with Great Potato Famine during the late 1840s. These particular immigrants were instrumental in creation of the United States and Canada as major industrial nations because the many essential elements such as the roadways, canals, bridges, and railways required an enormous quantity of cheap labor, which these poor immigrants provided. Later generations of Irish in these countries also went on to make valuable contributions in such fields as the arts, commerce, politics, and education. Extensive research into immigration and passenger lists has revealed many early immigrants bearing the name Shinnik: L. Shiner who settled in Philadelphia, Pennsylvania in 1754; followed by John A. Shiner in 1868; W.S. Shinner who settled in Boston Massachusetts in 1820.