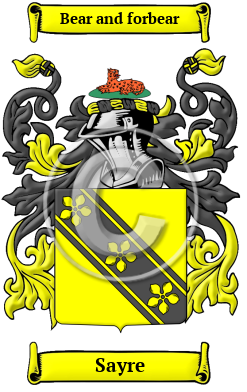 Sayre is one of the names that was brought to England in the wave of migration following the Norman Conquest of 1066. The Sayre family lived in Essex. Their name, however, is a reference to St. Saire, Normandy, the family's place of residence prior to the Norman Conquest of England in 1066. Alternatively, the name could have been a trade name for someone who was "an assayer of metals." [1] And another variation is that it could have been "an Anglo-Norman personal name, as Saher de Quincy, the famous Earl of Winchester." [1] There are at least three other listed origins of the name, but these latter three seem the most probable.

Early Origins of the Sayre family

The surname Sayre was first found in Essex where the family's first listing of the name was found during the reign of Edward II. [1] Omitting the entries as a personal name, we also found: Stephanus filius Seir (1148-1152) and ? filius Saheri (Saieri) c. 1160 in Lincolnshire.

The Thayer variant produced the Pilgrim Fathers and brothers Thomas Thayer (1596-1665) and Richard Thayer (1601-1664) who were born in Thornbury, Devon. The family were originally from Glastonbury, Somerset, the oldest found was John Tahyer, born c. 1450.

Early History of the Sayre family

Before the advent of the printing press and the first dictionaries, the English language was not standardized. Sound was what guided spelling in the Middle Ages, so one person's name was often recorded under several variations during a single lifetime. Spelling variations were common, even among the names of the most literate people. Known variations of the Sayre family name include Sayer, Sayers, Sayres and others.

Outstanding amongst the family at this time was Robert Sayer or Seare (1560-1602), a Benedictine monk, born at Redgrave, Suffolk, the son of John Seare; Sir John Sayer of Bourchers Hall in Essex; and his son, George Sayer (c. 1655-1718), an English courtier and politician, Member of Parliament...
Another 47 words (3 lines of text) are included under the topic Early Sayre Notables in all our PDF Extended History products and printed products wherever possible.

In the United States, the name Sayre is the 4,436th most popular surname with an estimated 7,461 people with that name. [3]

Migration of the Sayre family to Ireland

Some of the Sayre family moved to Ireland, but this topic is not covered in this excerpt.
Another 61 words (4 lines of text) about their life in Ireland is included in all our PDF Extended History products and printed products wherever possible.

Sayre migration to the United States +

To escape the political and religious chaos of this era, thousands of English families began to migrate to the New World in search of land and freedom from religious and political persecution. The passage was expensive and the ships were dark, crowded, and unsafe; however, those who made the voyage safely were encountered opportunities that were not available to them in their homeland. Many of the families that reached the New World at this time went on to make important contributions to the emerging nations of the United States and Canada. Research into various historical records has revealed some of first members of the Sayre family to immigrate North America:

Sayre Settlers in United States in the 17th Century

Sayre Settlers in United States in the 18th Century

Sayre Settlers in United States in the 19th Century

Sayre Settlers in United States in the 20th Century

Sayre Settlers in Canada in the 18th Century

Sayre Settlers in Canada in the 20th Century

Suggested Readings for the name Sayre +