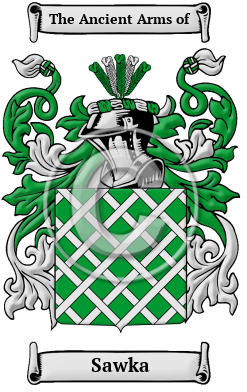 Early Origins of the Sawka family

The surname Sawka was first found in Cumberland where the Pipe Rolls of 1210 list Hamo de Salkil as holding lands there at that time. Sixty years later, Thomas de Salkild was listed in the Assize Rolls for Northumberland in 1279. [1]

Great and Little Salkeld date back to c. 1110 when they were collectively known as Salchild having been derived from the Old English "salh" + hylte" and literally meant "sallow-tree wood." [2]

Another source claims the place name is from the Viking "selia" + "kelda" and literally meant "the willow tree spring."

"There is a mineral spring on the common having chalybeate properties." [3]

"The family so called, very influential in Cumberland in the XIV. century, probably derived their name from either Great or Little Salkeld, in that county." [4]

"The church tower [of Great Salkeld], which appears to have contained four rooms one above another, was formerly resorted to as a place of security, and under it is a dungeon." [5]

The Placita de Quo Warranto, temp. Edward I-III had two listing for the family in Cumberland: John de Salkild; and Thomas de Salkeld. Both were listed "20 Edward I," or in other words "during the twentieth year of King Edward I's reign." [6]

Early History of the Sawka family

Before the last few hundred years, the English language had no fast system of spelling rules. For that reason, spelling variations are commonly found in early Anglo-Saxon surnames. Over the years, many variations of the name Sawka were recorded, including Salkeld, Salked, Salkeed, Salkelds and others.

Notables of this surname at this time include: Sir Richard Salkeld of Corby, Thomas Salkeld, High Sheriff of Cumberland in 1544. John Salkeld (1576-1660), was an English Catholic renegade and author, descended from the Salkelds of Corby Castle, Cumberland. "He was possibly of Queen's College, Oxford, but did not graduate, and was soon after sent to Spain, and studied under the Jesuits in the university of Coimbra. After living for a time at the house of Dr. King, Bishop of London, he indulged in speculations as to the nature of angels, and dedicated a treatise on the subject to the king in...
Another 113 words (8 lines of text) are included under the topic Early Sawka Notables in all our PDF Extended History products and printed products wherever possible.

Migration of the Sawka family to Ireland

Some of the Sawka family moved to Ireland, but this topic is not covered in this excerpt. More information about their life in Ireland is included in all our PDF Extended History products and printed products wherever possible.

Migration of the Sawka family

To escape oppression and starvation at that time, many English families left for the "open frontiers" of the New World with all its perceived opportunities. In droves people migrated to the many British colonies, those in North America in particular, paying high rates for passages in cramped, unsafe ships. Although many of the settlers did not make the long passage alive, those who did see the shores of North America perceived great opportunities before them. Many of the families that came from England went on to make essential contributions to the emerging nations of Canada and the United States. Research into various historical records revealed some of first members of the Sawka family emigrate to North America: Fred and George Salked arrived in New Orleans in 1820; Thomas Salkeld settled in Virginia in 1728.