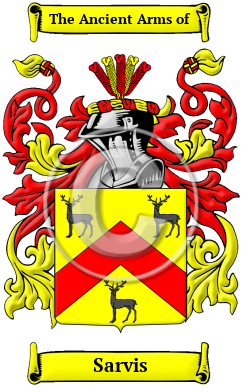 The name Sarvis was carried to England in the enormous movement of people that followed the Norman Conquest of 1066. The Sarvis family lived in Stirlingshire, Scotland. The famous Robert William Service (1874-1958) the English-born, Canadian poet and writer was born in Lancashire, England but his family hailed from Lanarkshire, Scotland. His poems "The Shooting of Dan McGrew" and "The Cremation of Sam McGee" were inspired by his life in the Yukon where he was often called "the Bard of the Yukon."

Early Origins of the Sarvis family

We need to take a moment to explain "rendered homage" and the significance of the year 1296. At that time King Edward I of England invaded Scotland and those who were "encouraged" to pay homage to him were recorded thusly. In many cases, there was little choice in the matter, render homage or lose your lands and life.

While the name is generally thought to be Scottish, if we look back further there are significant entries for early spellings in England. In fact, if we look to Normandy, we found the Magni Rotuli Scaccarii Normanniae listed William, Richard, Walter Cervus, Normandy 1180-95. [2] In France, Servais; was a personal name. [3] However, another source claims the name could have been derived from the Old French cervoise 'ale', for a seller of ale, a taverner. [4]

In England, Oxfordshire was one of the first places where early spellings of the family were found. Walter Cerveise was listed there in the Pipe Rolls of 1177 and then later in the Curia Regis Rolls of 1206. A few years later, the Hundredorum Rolls of 1279 also listed Cereveyse, Sereveyse in Oxfordshire. In Berkshire, the Pipe Rolls of 1230 listed William Ceruaise. [4]

Early History of the Sarvis family

Endless spelling variations are a prevailing characteristic of Norman surnames. Old and Middle English lacked any definite spelling rules, and the introduction of Norman French added an unfamiliar ingredient to the English linguistic stew. French and Latin, the languages of the court, also influenced spellings. Finally, Medieval scribes generally spelled words according to how they sounded, so one person was often referred to by different spellings in different documents. The name has been spelled Service, Surface, Serfaes, Servas, Servaes, Serveas, Servais, Services, Serfice and many more.

Outstanding amongst the family at this time was John Service (1833-1884), Scottish divine, son of John Service, engraver in the calico works of Robert Dalglish, M.P., at Lennoxtown, was born at Campsie on 26 Feb. 1833. "He was ordained in the church of Scotland in 1862, and for ten months performed ministerial work at Hamilton, near Glasgow. Shortly afterwards he spent eighteen months in Australia owing to failure of health. At the end of the period he was inducted to St. John's Presbyterian church (May...
Another 85 words (6 lines of text) are included under the topic Early Sarvis Notables in all our PDF Extended History products and printed products wherever possible.

In the United States, the name Sarvis is the 16,013rd most popular surname with an estimated 2,487 people with that name. [5]

Migration of the Sarvis family

To escape the political and religious persecution within England at the time, many English families left for the various British colonies abroad. The voyage was extremely difficult, though, and the cramped, dank ships caused many to arrive in the New World diseased and starving. But for those who made it, the trip was most often worth it. Many of the families who arrived went on to make valuable contributions to the emerging nations of Canada and the United States. An inquiry into the early roots of North American families reveals a number of immigrants bearing the name Sarvis or a variant listed above: Christian Servas who landed in North America in 1740; John Tobias Serveas settled in Philadelphia in 1727; John, Margaret, Thomas, and William Service settled in Philadelphia, Pennsylvania between 1803 and 1853.