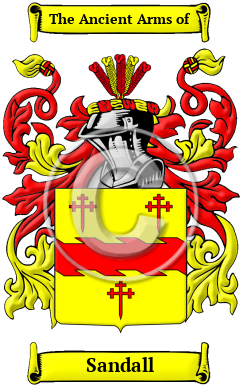 The name Sandall is of Anglo-Saxon origin and came from when the family lived throughout ancient Britain as the name literally means "dweller on sandy soil or by the sands." [1] [2]

"The vocable sand is found in composition of many localities, but the surnames Sand, Sands may mean a messenger, one sent; from German tenden, Goth, sandjan, Anglo-Saxon sendan." [3]

Early Origins of the Sandall family

The surname Sandall was first found in Surrey where William de Sandes was listed in the Curia Regis Rolls of 1205. A few years later, Walter de la Sonde was found in the Feet of Fines for Surrey in 1248, and later again, Andrew atte Sonde was registered in the Subsidy Rolls for Sussex in 1296. Other early entries include: Reginald del Sond in Suffolk in 1298, Thomas Attensandes in the Subsidy Rolls for Yorkshire in 1301 and Gilbert del Sandes in the Curia Regis Rolls for Cumberland in 1332. [1]

Many families were caught up the religious turmoil of the time and this family was no exception in Gloucestershire. "The first that was called to shed his blood was the Rev. John Sands, or Sandys. Ordained priest at Rheims, he came on the English mission in 1584. Labouring diligently in the work of the ministry, he was apprehended, and was soon condemned to the death of a traitor, for his priestly character. Paul Tracye, of Stanwey, then Sheriff of the county, assisted at his barbarous execution in Gloucester on 2nd August, 1586." [5]

Walter atte Sond was bailiff of Yarmouth, Norfolk in 1335 and about the same time, "Earl Sondes owned a large estate in Norfolk." [6]

In northern England we found Johannes del Sandes listed in the Yorkshire Poll Tax Rolls of 1379 and the Estates and Families of Cumberland, Cumberland included an entry for Thomas del Sandes, 16 Richard II (during the sixteenth year of King Richard II's reign.) [7]

Further to the north in Scotland, the family came "from the lands of Sands in the parish of Tulliallan in Fife, which in 1494 were in possession of Thomas Sands and his mother, Isobel Hudson. John Sands was chaplain at Polkelly in 1487, Thomas Sandis of that Ilk was tenant in the quarter lands of Lurg near Culross, 1587." [8]

Early History of the Sandall family

It is only in the last few hundred years that the English language has been standardized. For that reason, early Anglo-Saxon surnames like Sandall are characterized by many spelling variations. As the English language changed and incorporated elements of other European languages, even literate people changed the spelling of their names. Scribes and monks in the Middle Ages spelled names they sounded, so it is common to find several variations that refer to a single person. The variations of the name Sandall include: Sand, Sands, Sandes, Sandis, Sandall, Saundes, Sonds and many more.

Distinguished members of the family include George Sondes, Earl of Feversham (1600-1677), born in 1600 at Lees Court, in the parish of Sheldwich, near Feversham in Kent, son and heir of Sir Richard...
Another 32 words (2 lines of text) are included under the topic Early Sandall Notables in all our PDF Extended History products and printed products wherever possible.

Migration of the Sandall family to Ireland

Some of the Sandall family moved to Ireland, but this topic is not covered in this excerpt.
Another 110 words (8 lines of text) about their life in Ireland is included in all our PDF Extended History products and printed products wherever possible.

Sandall migration to the United States +

Many English families tired of political and religious strife left Britain for the new colonies in North America. Although the trip itself offered no relief - conditions on the ships were extremely cramped, and many travelers arrived diseased, starving, and destitute - these immigrants believed the opportunities that awaited them were worth the risks. Once in the colonies, many of the families did indeed prosper and, in turn, made significant contributions to the culture and economies of the growing colonies. An inquiry into the early roots of North American families has revealed a number of immigrants bearing the name Sandall or a variant listed above:

Sandall Settlers in United States in the 17th Century

Sandall Settlers in United States in the 18th Century

Sandall Settlers in Australia in the 19th Century

Historic Events for the Sandall family +