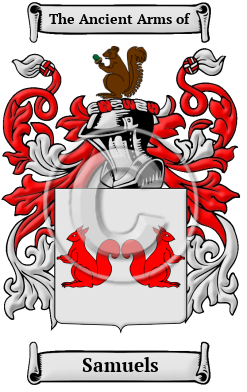 The origins of the name Samuels are with the Anglo-Saxon tribes of Britain. The name is derived from the baptismal name for the son of Samuel. This ancient Hebrew font name meaning name of God was not common in the Middle Ages, but was not necessarily of Jewish origin. There were many records of the surname Samuels of English descent.

Early Origins of the Samuels family

The surname Samuels was first found in Cornwall where they held a family seat from early times. The family name first appeared on the early census rolls taken by the early Kings of Britain to determine the rate of taxation of their subjects.

Early History of the Samuels family

The first dictionaries that appeared in the last few hundred years did much to standardize the English language. Before that time, spelling variations in names were a common occurrence. The language was changing, incorporating pieces of other languages, and the spelling of names changed with it. Samuels has been spelled many different ways, including Samwell, Samuel, Samuell, Samway, Samuels and others.

Notables of this surname at this time include: William Samuel (fl. 1551-1569), English divine and poet, perhaps connected with the Samwells of Northampton; Sir William Samwell (1559-1628), Auditor of the Exchequer to Queen Elizabeth I of England; William Samwell (1628-1676) was an English architect; and Sir Thomas Samwell, 1st Baronet (c.1654-1694), Member of Parliament for Northamptonshire from 1689 to 1690 and Northampton from 1690 to 1694. Edward Samuel (1674-1748), Welsh...
Another 70 words (5 lines of text) are included under the topic Early Samuels Notables in all our PDF Extended History products and printed products wherever possible.

Migration of the Samuels family to Ireland

Some of the Samuels family moved to Ireland, but this topic is not covered in this excerpt.
Another 31 words (2 lines of text) about their life in Ireland is included in all our PDF Extended History products and printed products wherever possible.

Samuels migration to the United States +

Thousands of English families in this era began to emigrate the New World in search of land and freedom from religious and political persecution. Although the passage was expensive and the ships were dark, crowded, and unsafe, those who made the voyage safely were rewarded with opportunities unavailable to them in their homeland. Research into passenger and immigration lists has revealed some of the very first Samuelss to arrive in North America:

Samuels Settlers in United States in the 19th Century

Samuels Settlers in United States in the 20th Century

Samuels Settlers in Australia in the 19th Century

Samuels Settlers in New Zealand in the 19th Century

Historic Events for the Samuels family +