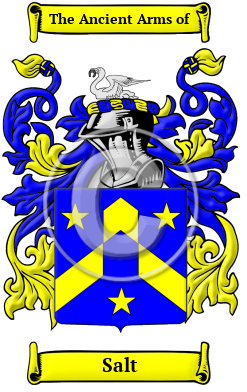 Early Origins of the Salt family

The surname Salt was first found in Staffordshire at Salt with Enson, a township, in the parish of St. Mary and St. Chad, Stafford, union of Stafford about 4 miles (N. E. by N.) from Stafford. [1]

The township dates back to the Domesday Book of 1086 when it was known as Selte. [2] As one would expect, the place name literally means "salt-pit, a salt works." [3]

"This surname is very common in Staffordshire, in which county there is a village so called. In 1166, it is written Selte" [4] "Hugh de Salt held Salt of Philip de Chetwynd. From this tenure, and from the resemblance of the arms, it is probable that Salt was a cadet of Chetwynd. " [5]

The Hundredorum Rolls of 1273 lists Ranulph de Saut, Cambridgeshire [7] and Ivo de Saut was found in Staffordshire, Henry III-Edward I (during the reigns of Henry III and Edward I). [8]

"Salt, an ancient and a very common Staffordshire name, is exceedingly numerous in the Ashbourne district, on the borders of Derbyshire, in which county also it is well represented. Salt is the name of a Staffordshire village and district; and Salte of Salte was the original ancestor of the family. The Saltes of Yoxall were a family of gentry 300 years ago; in 1600 Mr. Walter Salt left a bequest for the poor tradesmen of Lichfield, and the name is still in that city." [9]

Early History of the Salt family

Until quite recently, the English language has lacked a definite system of spelling rules. Consequently, Anglo-Saxon surnames are characterized by a multitude of spelling variations. Changes in Anglo-Saxon names were influenced by the evolution of the English language, as it incorporated elements of French, Latin, and other languages. Although Medieval scribes and church officials recorded names as they sounded, so it is common to find one person referred to by several different spellings of his surname, even the most literate people varied the spelling of their own names. Variations of the name Salt include Salt, Saut and others.

Notables of this surname at this time include: Henry Salt (1780-1827), English traveller and collector of antiquities, born at Lichfield, 14 June 1780, the youngest child of Thomas Salt, a Lichfield doctor, by his wife Alice, daughter of Cary Butt, another medical man of Lichfield. [10] Thomas Salt (died 1788) of Rugeley, Staffordshire had John Stevenson Salt (1775-1845), an English barrister, banker and land owner...
Another 63 words (4 lines of text) are included under the topic Early Salt Notables in all our PDF Extended History products and printed products wherever possible.

Migration of the Salt family to Ireland

Some of the Salt family moved to Ireland, but this topic is not covered in this excerpt.
Another 43 words (3 lines of text) about their life in Ireland is included in all our PDF Extended History products and printed products wherever possible.

Salt migration to the United States +

Searching for a better life, many English families migrated to British colonies. Unfortunately, the majority of them traveled under extremely harsh conditions: overcrowding on the ships caused the majority of the immigrants to arrive diseased, famished, and destitute from the long journey across the ocean. For those families that arrived safely, modest prosperity was attainable, and many went on to make invaluable contributions to the development of the cultures of the new colonies. Research into the origins of individual families in North America revealed records of the immigration of a number of people bearing the name Salt or a variant listed above:

Salt Settlers in United States in the 17th Century

Salt Settlers in United States in the 18th Century

Salt Settlers in United States in the 19th Century

Salt Settlers in Canada in the 18th Century

Salt Settlers in Australia in the 19th Century

Salt Settlers in New Zealand in the 19th Century

Historic Events for the Salt family +