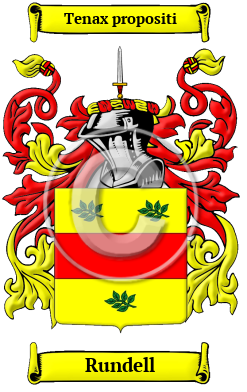 Rundell is a name that was carried to England in the great wave of migration from Normandy following the Norman Conquest of 1066. The Rundell family lived in Kent, at the Manor of Rundale, from whence their name is derived. "Randall, formerly called Roundall and Rundale, is a manor in this parish, which, though at present of little repute, was anciently of some note, as being one of the seats of the noble family of Cobham, where they are Baid to have resided before they removed to Cobham Hall." [1]

"In the XIII. century, John de Cobham gave Rundale to his second son Henry, and his descendants were variously written Roundale, Rundel, Roundall, and Rundella, and so lately as 8 Henry VI. the then proprietor of the estate was styled Lord Thomas de Cobham, alias Rundella, Knight." [1] While many of the family emigrated to England, not all did. Lucas, Geoffry and John Roondel were listed in Normandy (1180-1195) and later Stephen Roundel, Geoffry, Hugh and Lucas Roondel were listed there in 1198. [2]

Early Origins of the Rundell family

The surname Rundell was first found in Kent where they were a branch of the great Baronial family of Cobham, seated as Lords of the Manor of Roundell in the parish of Shorne. In the 13th century John Cobham gave the Manor of Rundale to his second son. He was styled Lord Thomas de Cobham, alias Roundell, Knight. From this scion many branches descended, many with different spellings of the name Roundell, into the counties of Devon, Cornwall and Somerset. [1]

"The Roundells of Screven, in Yorkshire, have possessed Screven ever since the early part of the XV. century, the first recorded progenitor being John Roundel, of that place, 3. Henry VI. [(during the third year of the reign of Henry VI)]" [3]

Much farther to the south in the parish of Mabe, Cornwall, "Spargo in this parish, is said by Norden to have been a seat of the Randolls or Rundles; but in this opinion he is supposed to have been misinformed, as their seat was at Trewoon, which is now a farm house, although Spargo is acknowledged to have been their property." [4]

Early History of the Rundell family

Before English spelling was standardized a few hundred years ago, spelling variations of names were a common occurrence. Elements of Latin, Norman French and other languages became incorporated into English throughout the Middle Ages, and name spellings changed even among the literate. The variations of the surname Rundell include Roundle, Roundall, Roundell, Roundill, Roundale and many more.

Outstanding amongst the family at this time was John Roundell of Screven living temp. Henry VI, generally understood to be the progenitor the Gledstone branch. His grandson Marmaduke Roundell married Jane Lowe in 1558 and they bore a son William Roundell who died in 1582. His son, another William was juror at the presentment as the Castle...
Another 57 words (4 lines of text) are included under the topic Early Rundell Notables in all our PDF Extended History products and printed products wherever possible.

In the United States, the name Rundell is the 8,436th most popular surname with an estimated 2,487 people with that name. [5]

Rundell migration to the United States +

In England at this time, the uncertainty of the political and religious environment of the time caused many families to board ships for distant British colonies in the hopes of finding land and opportunity, and escaping persecution. The voyages were expensive, crowded, and difficult, though, and many arrived in North America sick, starved, and destitute. Those who did make it, however, were greeted with greater opportunities and freedoms that they could have experienced at home. Many of those families went on to make important contributions to the young nations in which they settled. Early immigration records have shown some of the first Rundells to arrive on North American shores:

Rundell Settlers in United States in the 18th Century

Rundell Settlers in United States in the 19th Century

Rundell Settlers in United States in the 20th Century

Rundell Settlers in Canada in the 18th Century

Rundell Settlers in Canada in the 20th Century

Rundell Settlers in Australia in the 19th Century

Rundell Settlers in Australia in the 20th Century

Rundell Settlers in New Zealand in the 19th Century