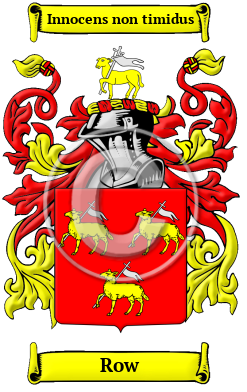 The name Row is rooted in the ancient Norman culture that arrived in England after the Norman Conquest of England in 1066. It was a name for someone who was a person with red hair. Looking back even further, we found the name was originally derived from the Old French nickname le rous, meaning redhead. [1] Further to the north in Scotland, the name has a different meaning, specifically "row, signifies a low, small, narrow peninsula." [2]

Early Origins of the Row family

The surname Row was first found in Norfolk where Turchil le Roux was granted lands by King William after his attendance upon him at Hastings. His son Ralph the Red (Roux) went with King Henry to the Crusades and held the Castle of Pont-echanfre near Bernai in Vexin Normandy. He died in the wreck of the "Blanche Neuf" with the King's two sons and their estates became divided. [3]

In Somerset, "Leighland, in the parish of Old Cleeve, was the property of the Poyntz family. From them it descended to the Rowes, in the reign of William III. John Rowe, as I learn from the parish register of Arlington, married Ursula Chi chester, on 25th November, 1697, yet left no issue ; but to him William Widdicombe, Esq., devised his estate of Bickham, adjoining. Robert Rowe, the nephew of the said John, married Prudence Chichester, 15th August, 1706, and had several children ; one of them, Elizabeth, became the wife of John Needham, of Hilston, county Monmouth." [4]

Early History of the Row family

Endless spelling variations are a prevailing characteristic of Norman surnames. Old and Middle English lacked any definite spelling rules, and the introduction of Norman French added an unfamiliar ingredient to the English linguistic stew. French and Latin, the languages of the court, also influenced spellings. Finally, Medieval scribes generally spelled words according to how they sounded, so one person was often referred to by different spellings in different documents. The name has been spelled Rowe, Roe, Row and others.

Outstanding amongst the family at this time was Sir Thomas Roe (c. 1581-1644), an English diplomat, chancellor of the Order of the Garter; Sir Thomas Rowe, Lord Mayor of London in 1559; Owen Rowe, (c. 1592-1661), English haberdasher in London, one of the regicides of King Charles I; Sir William Rowe, Lord Mayor of London in 1592; Sir Henry Rowe, Lord Mayor of London in 1607; Nicholas Rowe (1674-1718), English poet and miscellaneous writer, appointed Poet Laureate in 1715; John Rowe (1626-1677), an English clergyman, lecturer to Westminster Abbey (1654); and his son, Thomas Rowe (1657-1705), an English nonconformist minister, tutor...
Another 126 words (9 lines of text) are included under the topic Early Row Notables in all our PDF Extended History products and printed products wherever possible.

Migration of the Row family to Ireland

Some of the Row family moved to Ireland, but this topic is not covered in this excerpt.
Another 68 words (5 lines of text) about their life in Ireland is included in all our PDF Extended History products and printed products wherever possible.

Row migration to the United States +

To escape the political and religious persecution within England at the time, many English families left for the various British colonies abroad. The voyage was extremely difficult, though, and the cramped, dank ships caused many to arrive in the New World diseased and starving. But for those who made it, the trip was most often worth it. Many of the families who arrived went on to make valuable contributions to the emerging nations of Canada and the United States. An inquiry into the early roots of North American families reveals a number of immigrants bearing the name Row or a variant listed above:

Row Settlers in United States in the 17th Century

Row Settlers in United States in the 18th Century

Row Settlers in United States in the 19th Century

Row Settlers in Canada in the 18th Century

Row Settlers in Canada in the 19th Century

Row Settlers in Australia in the 19th Century

Row Settlers in New Zealand in the 19th Century