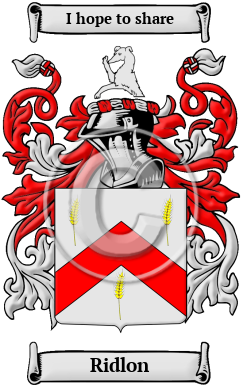 When the ancestors of the Ridlon family emigrated to England following the Norman Conquest in 1066 they brought their family name with them. They lived in Yorkshire at Ryedale or in Westmorland at Rydal with Loughrigg. The name Riddell and its variants occur in both locations. Ridlon is a classic example of an English polygenetic surname, which is a surname that was developed in a number of different locations and adopted by various families independently.

Early Origins of the Ridlon family

The surname Ridlon was first found in Aquitaine where this baronial name was derived from a Gothic race. It was here that the Baron of Blaye (c. 1030) granted lands to the Abbey of Fons Dulcis near Bordeaux. This grant was confirmed by Gerald de Blavia and one of his sons Geoffre Rudelli (Ridel.) The latter lived 1079-1099 and left for Scotland during the time of King David I. Upon his arrival, he received grants of lands. He was the ancestor of the Riddells, Baronets. [2]

Early History of the Ridlon family

The English language only became standardized in the last few centuries. For that reason, spelling variations are common among many Anglo-Norman names. The shape of the English language was frequently changed with the introduction of elements of Norman French, Latin, and other European languages; even the spelling of literate people's names were subsequently modified. Ridlon has been recorded under many different variations, including Riddell, Riddle, Riddall, Riddells, Ridel and others.

Outstanding amongst the family at this time was Sir John Riddell, 1st Baronet (d. 1632); Sir Walter Riddell, 2nd Baronet (d. c. 1669); Sir John Riddell, 3rd Baronet (d. 1 April 1700); and Sir Walter Riddell, 4th Baronet (1664-1747.) James Riddell (died 1674), was a Scottish merchant and manufacturer, the son of James Riddell. His father, also James Riddell, claimed descent from the Norman Baron Galfridus Riddell of Blaye in Guienne, the first of the English Riddells...
Another 76 words (5 lines of text) are included under the topic Early Ridlon Notables in all our PDF Extended History products and printed products wherever possible.

In the United States, the name Ridlon is the 16,028th most popular surname with an estimated 2,487 people with that name. [5]

Migration of the Ridlon family to Ireland

Some of the Ridlon family moved to Ireland, but this topic is not covered in this excerpt.
Another 69 words (5 lines of text) about their life in Ireland is included in all our PDF Extended History products and printed products wherever possible.

Migration of the Ridlon family

To escape the uncertainty of the political and religious uncertainty found in England, many English families boarded ships at great expense to sail for the colonies held by Britain. The passages were expensive, though, and the boats were unsafe, overcrowded, and ridden with disease. Those who were hardy and lucky enough to make the passage intact were rewarded with land, opportunity, and social environment less prone to religious and political persecution. Many of these families went on to be important contributors to the young nations of Canada and the United States where they settled. Ridlons were some of the first of the immigrants to arrive in North America: William Riddell settled in Virginia in 1635; Archibald Riddell settled in New Jersey in 1685; Sarah Riddall settled in Virginia in 1640 with her husband.