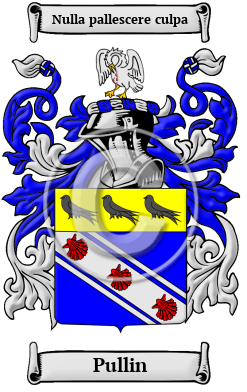 Pullin is an ancient name dating from the times of the Anglo-Saxon tribes of Britain. It was a name for a person who was a young buck; it is derived from the Old French word poulain, which meant colt. This nickname would have been given to a person given over to friskiness and possessed of a certain nervous energy in much the same way a young horse is. A broad and miscellaneous class of surnames, nickname surnames referred to a characteristic of the first person who used the name. They can describe the bearer's favored style of clothing, appearance, habits, or character. Often nicknames described strong traits or attributes that people wished to emulate in a specific animal. In the pre-Christian era, many pagan gods and demigods were believed to be a mixture of animals and humans, such as the Greek god Pan who was the god of flocks and herds and was represented as a man with the legs, horns and ears of a goat. In the Middle Ages, anthropomorphic ideas, which attributed human qualities and form to gods or animals, were held about the characters of other living creatures. They were based on the creature's habits. Moreover, these associations were reflected in folk-tales, mythology, and legends which portrayed animals behaving as humans.

Early Origins of the Pullin family

The surname Pullin was first found in Yorkshire but one of the earliest record of the name was Robert Pullen (died 1146), an English theologian and official of the Roman Catholic Church. He is generally thought to have been born in Poole, Devonshire and first educated in England. He was Archdeacon of Rochester in 1134. Shortly after this appointment, he went to Paris. There, he taught logic and theology tutoring John of Salisbury, who describes him as a man commended both by his life and his learning in 1141. Back in France, we found that John and Ivo Polain were listed in Normandy (1185-1190.) A few years later nine of the name were listed there in 1198 [1]

Early History of the Pullin family

Until the dictionary, an invention of only the last few hundred years, the English language lacked any comprehensive system of spelling rules. Consequently, spelling variations in names are frequently found in early Anglo-Saxon and later Anglo-Norman documents. One person's name was often spelled several different ways over a lifetime. The recorded variations of Pullin include Pulleine, Pullen, Pullan, Pulleyn, Pulling and many more.

Notables of this surname at this time include: Samuel Pullen, Pullein, or Pulleyne (1598-1667), an English prelate, Archbishop of Tuam, son of William Pullein, rector of Ripley, Yorkshire; Benjamin Pulleyn (died 1690) the Cambridge tutor of Isaac Newton; Samuel Pullen (also Pullein and Pulleyne) (1598-1667), who was the Church of Ireland Archbishop of Tuam; and Henry-Percy Pulleine who purchased Crake Hall. John Pullain (Pullayne or Pulleyne) (1517-1565) was a Yorkshire divine and poet who was educated at New College, Oxford. Josiah Pullen (1631-1714) was Vice-Principal...
Another 84 words (6 lines of text) are included under the topic Early Pullin Notables in all our PDF Extended History products and printed products wherever possible.

In the United States, the name Pullin is the 12,973rd most popular surname with an estimated 2,487 people with that name. [2]

Pullin migration to the United States +

Thousands of English families boarded ships sailing to the New World in the hope of escaping the unrest found in England at this time. Although the search for opportunity and freedom from persecution abroad took the lives of many because of the cramped conditions and unsanitary nature of the vessels, the opportunity perceived in the growing colonies of North America beckoned. Many of the settlers who survived the journey went on to make important contributions to the transplanted cultures of their adopted countries. The Pullin were among these contributors, for they have been located in early North American records:

Pullin Settlers in United States in the 17th Century

Pullin Settlers in United States in the 18th Century

Pullin Settlers in United States in the 19th Century

Pullin Settlers in United States in the 20th Century

Pullin Settlers in Canada in the 19th Century

Pullin Settlers in New Zealand in the 19th Century

Pullin Settlers in West Indies in the 17th Century