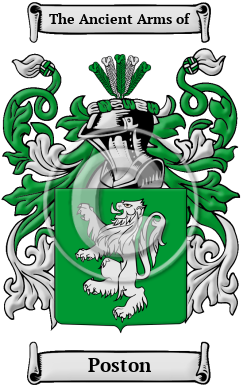 Early Origins of the Poston family

The surname Poston was first found in the Scottish Borders at Gattonside where "their name appears in record as Boustoune and Bowstone. There is a town named Boston in Lincolnshire, but the Scottish name may be of local origin. Bernard Boustoun was one of the witnesses to a charter by Andrew, abbot of Melrose, 1540. " [1]

Early History of the Poston family

Notable amongst the family name during their early history was Buriensis Boston (fl. 1410), or John Boston of Bury, author of the 'Catalogus Scriptorum Ecclesiæ' and the 'Speculum Cœnobitarum,' an Augustinian monk belonging to the abbey at Bury St. Edmunds. His full name was probably John Boston, his surname being perhaps taken from the town of his birth or...
Another 59 words (4 lines of text) are included under the topic Early Poston Notables in all our PDF Extended History products and printed products wherever possible.

In the United States, the name Poston is the 3,368th most popular surname with an estimated 9,948 people with that name. [5]

Poston migration to the United States +

Poston Settlers in United States in the 19th Century

Poston Settlers in United States in the 20th Century

Suggested Readings for the name Poston +