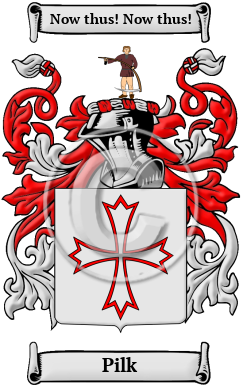 The origins of the Pilk name lie with England's ancient Anglo-Saxon culture. It comes from when the family lived in Pilkington, a manor in the parish of Prestwick, Lancashire. There seems to be two early distinct entries of the various derivations of the name: William Pylk who was listed in the Assize Rolls of 1303; Peter Pylke who was listed in the Sussex Rolls of 1332 and from these an early Old English entry of Pileca which while being unrecorded was nevertheless found in Pilkington Lancashire. The other distinct origin included Alexander de Pilkington de Pilkington in 1205; and John Pylkyngton in 1470. Both origins point to the aforementioned town in Lancashire. [1]

Early Origins of the Pilk family

The surname Pilk was first found in Lancashire at Pilkington, a township in the parish of Prestwich-cum-Oldham, hundred of Salford. This distinguished Saxon family held a family seat in Lancashire since before the Norman invasion, traditionally escaping after the Battle of Hastings by posing as a thresher and hiding in a barn under hay and the flail hit first on one side and then the other, hence their motto 'Now thus, now thus' and the Family Crest of a mower." [2]

However, Shirley presumes that "the more probable scene of this event, where four knights of the family were in arms on the part of Richard III [at the Battle of Bosworth.]" Shirley continues, "A right ancient family, gentlemen of repute in the county before the Conquest." [3]

Another source phrases the early family history similarly: "A branch of the Pilkington family early became the principal proprietors, and few families in the county are more closely interwoven with its history than the members of this knightly house. The battle of Bosworth-Field proved almost as fatal to the fortunes of the parent stock of the Pilkingtons, as to the power of the royal tyrant Richard: and in the grant made by Henry VII. under the great seal, to Thomas, Earl of Derby, of divers manors and lands in Lancashire, forfeited by Sir Thomas Pilkington, was this manor. " [4]

The ecclesiastical district of Stand in Lancashire was home to another ancient branch of the family. "An old Hall of the Pilkington family, generally known as Stand Hall, whence the place derived its name, existed so recently as 1845, when it was taken down: on the foundation stone was the date 1518. This structure was erected by the Earl of Derby, to whom the manor of Pilkington had been granted by Henry VII. after the battle of BosworthField; and the building is traditionally reported to have been five stories high, but reduced many years ago to its late elevation of three stories, the highest of the three being elaborately ornamented by the crests of the earls of Derby, the eagle and child, and the legs of Man." [4]

Gilbert Pilkington (fl. 1350) was the reputed author of 'The Tournament of Tottenham,' a burlesque in verse. He is thought to have also written 'The Feest' the perhaps 'The Story of Robin Hood and Little John.' [5]

Early History of the Pilk family

Before the last few hundred years, the English language had no fast system of spelling rules. For that reason, spelling variations are commonly found in early Anglo-Saxon surnames. Over the years, many variations of the name Pilk were recorded, including Pilkington, Pilkinton and others.

Distinguished members of the family include James Pilkington (1520-1576), Bishop of Durham from 1561 until 1576; Leonard Pilkington (1527-1599) was an English academic and clergyman, Regius Professor of Divinity at Cambridge (1561-1562), Master of St John's College, Cambridge (1561-1564); Francis Pilkington (c.1565-1638), an English composer, lutenist and singer...
Another 48 words (3 lines of text) are included under the topic Early Pilk Notables in all our PDF Extended History products and printed products wherever possible.

Migration of the Pilk family to Ireland

Some of the Pilk family moved to Ireland, but this topic is not covered in this excerpt.
Another 44 words (3 lines of text) about their life in Ireland is included in all our PDF Extended History products and printed products wherever possible.

Migration of the Pilk family

To escape oppression and starvation at that time, many English families left for the "open frontiers" of the New World with all its perceived opportunities. In droves people migrated to the many British colonies, those in North America in particular, paying high rates for passages in cramped, unsafe ships. Although many of the settlers did not make the long passage alive, those who did see the shores of North America perceived great opportunities before them. Many of the families that came from England went on to make essential contributions to the emerging nations of Canada and the United States. Research into various historical records revealed some of first members of the Pilk family emigrate to North America: William Pilkington, who settled in Virginia in 1620; Margaret Pilkington and her husband, who settled in Virginia in 1635; Ashton Pilkerton, who arrived in Philadelphia in 1860.