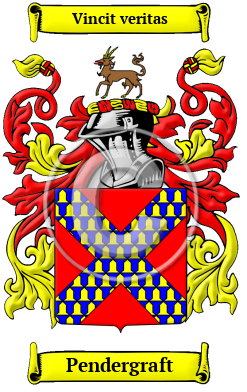 The Pendergraft surname belongs to the large category of Anglo-Norman habitation names, which are thought to have originally derived from pre-existing names for towns, villages, parishes, or farmsteads in Normandy. In Ireland, the name was turned into a Gaelic form as de Priondragás; however, the name has also been replaced with MacSherone.

Early Origins of the Pendergraft family

The surname Pendergraft was first found in Pembrokeshire (Welsh: Sir Benfro), a county in south-west Wales, anciently part of the Welsh kingdom of Deheubarth, where they held a family seat from early times and were Lords of the manor of Prendergast and estates in that shire. Maurice, Lord of Prendergast was a great friend and neighbor of Strongbow, Earl of Pembroke. He accompanied Strongbow in the Anglo\ Norman invasion of Ireland in 1172. He was summoned back to England by Henry II., in 1175 to escort the rebellious Robert, Earl of Essex, captive into Normandy in 1177. Upon his return to England he once again returned to Ireland and was rewarded with lands in Ireland in Waterford and south Mayo. [1]

Early History of the Pendergraft family

During the lifetime of an individual person, his name was often spelt by church officials and medieval scribes the way it sounded. An examination of the many different origins of each name has revealed many spelling variations for the name: Prendergast, Prendegast, Pendergast, Pendegast, Prendregast, Pendergrass, Pendergrist, Pender and many more.

Notable amongst the family up to this time was Thomas Prendergast (d. 1725) of Croane, County Limerick; and his son, Brigadier-General Sir Thomas Prendergast (c. 1660-1709), 1st Baronet Prendergast, of Gort, Member of Parliament for Monaghan Borough (1703-1710.) Both hail from an ancient...
Another 41 words (3 lines of text) are included under the topic Early Pendergraft Notables in all our PDF Extended History products and printed products wherever possible.

In the United States, the name Pendergraft is the 13,686th most popular surname with an estimated 2,487 people with that name. [2]

Migration of the Pendergraft family

In the mid-19th century, Ireland experienced one of the worst periods in its entire history. During this decade in order to ease the pressure of the soil, which was actually depleted by the effects of the previous years' grain crops, landowners forced tenant farmers and peasants onto tiny plots of land that barely provided the basic sustenance a family required. Conditions were worsened, though, by the population of the country, which was growing fast to roughly eight million. So when the Great Potato Famine of the mid-1840s hit, starvation and diseases decimated the population. Thousands of Irish families left the country for British North America and the United States. The new immigrants were often accommodated either in the opening western frontiers or as cheap unskilled labor in the established centers. In early passenger and immigration lists there are many immigrants bearing the name Pendergraft: Phillip Prendergast who settled in Virginia in 1643; Richard and Miles Prendergast arrived in Philadelphia, Pennsylvania in 1858; Edward Prendergrast settled in Philadelphia in 1838.