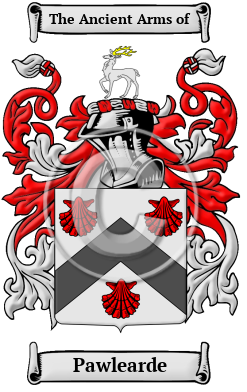 The notable Pawlearde family arose among the Cornish People, a race with a rich Celtic heritage and an indomitable fighting spirit who inhabited the southwest of England. While surnames were well-known during the English medieval period, Cornish People originally used only a single name. The way in which hereditary surnames came into common use is interesting. As the population of medieval Europe multiplied, people began to assume an extra name to avoid confusion and to further identify themselves. Under the Feudal System of government, surnames evolved and they often reflected life on the manor and in the field. Patronymic surnames were derived from given names and were the predominant type of surname among the Celtic peoples of Britain. However, the people of Cornwall provide a surprising exception to this rule, and patronymic surnames are less common among them than other people of Celtic stock, such as their Welsh neighbors. This is due to the greater influence of English bureaucracy and naming practices in Cornwall at the time that surnames first arose. This type of surname blended perfectly with the prevailing Feudal System. One feature that is occasionally found in Cornish surnames of this type is the suffix -oe or -ow; this is derived from the Cornish plural suffix -ow. is a patronymic surname that came from the popular religious given name, Paul. Pawlearde is a patronymic surname, which belongs to the category of hereditary surnames. Many patronymic surnames were formed by adopting the given name of an ancestor of the bearer, while others came from popular religious names, and from the names of secular heroes. However, this surname may have also been a nickname, taken from the Old English word poll, which means head, and the suffix -ard, which referred to something big. [1]

Early Origins of the Pawlearde family

The surname Pawlearde was first found in Cornwall where one source claims "the barton of Trelleigh in Redruth, was 'the seat of that most ancient family or Pollard, from whence all of the of that name were descended.' " [2]

Also of note was the Abbey of Ford, Axminster, Devon. "The Abbey passed in the first place by lease to Richard Pollard, but was afterwards bought by him. Sir John Pollard, his son, sold it to his cousin, Sir Amias Poulett ; and he to William Rosewall, Elizabeth's attorney-general." [4]

Early History of the Pawlearde family

Cornish surnames are characterized by a multitude of spelling variations. The frequent changes in surnames are due to the fact that the Old and Middle English languages lacked definite spelling rules. The official court languages, which were Latin and French, were also influential on the spelling of a surname. Since the spelling of surnames was rarely consistent in medieval times, and scribes and church officials recorded names as they sounded rather than adhering to any specific spelling rules, it was common to find the same individual referred to with different spellings of their surname in the ancient chronicles. Moreover, a large number of foreign names were brought into England, which accelerated and accentuated the alterations to the spelling of various surnames. Lastly, spelling variations often resulted from the linguistic differences between the people of Cornwall and the rest of England. The Cornish spoke a unique Brythonic Celtic language which was first recorded in written documents during the 10th century. However, they became increasingly Anglicized, and Cornish became extinct as a spoken language in 1777, although it has been revived by Cornish patriots in the modern era. The name has been spelled Pollard, Pollarde, Poullard, Pawlarde and others.

Notables of the family at this time include Sir Lewis Pollard (c. 1465-1540), English jurist, son of Robert Pollard of Roborough, near Torrington, Devon; Leonard Pollard (died 1556), English divine from Nottinghamshire; Sir Lewis Pollard, 1st Baronet (died 1641) of King's Nympton, Devon; and his son, Sir Hugh Pollard, 2nd Baronet (1603-1666), an English soldier and politician who sat in the House of Commons between 1640 and 1667, he supported the Royalist cause in the English Civil War; Sir Amyas Pollard, 3rd Baronet (1616-1701), an English gentleman of Devon; and his illegitimate son by unknown mistress, Thomas Pollard (1681-1710), of...
Another 99 words (7 lines of text) are included under the topic Early Pawlearde Notables in all our PDF Extended History products and printed products wherever possible.

Migration of the Pawlearde family to Ireland

Some of the Pawlearde family moved to Ireland, but this topic is not covered in this excerpt. More information about their life in Ireland is included in all our PDF Extended History products and printed products wherever possible.

Migration of the Pawlearde family