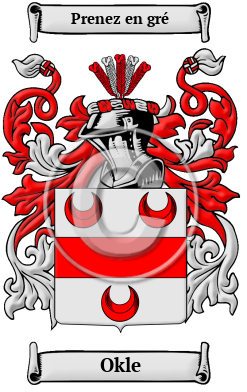 Early Origins of the Okle family

The surname Okle was first found in Northumberland where the earliest record of the name was of Humphrey de Hoggell who was granted a deed by William the Conqueror to enjoy "all the liberties and royalties of his manor of Ogle in an ample as a manner as any of his ancestors enjoyed the same before the time of the Norman invasion." Another source adds to this claim, " the manor formed part of the possessions, and was the residence, of the Ogle family, who were seated here before the Conquest, and with whom it continued till the time of Elizabeth. " [1] The township of Shilvington in Northumberland was home to another branch of the family. "It was anciently a manor in the Merlay barony, and was the property of the knightly families of Gubium and Ogle, the connexion of the latter of whom with the place was revived in 1830, the Rev. J. Savile Ogle then purchasing the estate." [1]

Early History of the Okle family

Migration of the Okle family to Ireland

Some of the Okle family moved to Ireland, but this topic is not covered in this excerpt.
Another 63 words (4 lines of text) about their life in Ireland is included in all our PDF Extended History products and printed products wherever possible.

Okle migration to the United States +

Okle Settlers in United States in the 19th Century