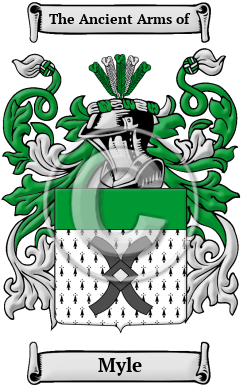 Myle is an ancient Norman name that arrived in England after the Norman Conquest of 1066. The name Myle comes from the given name Miles or Milo. [1] [2] The name Myle is of Germanic origin and is derived from the Old German word mil, which meant beloved. The family name Myle was brought to England after the Norman Conquest, when William the Conqueror gave his friends and relatives most of the land formerly owned by Anglo-Saxon aristocrats. This distinguished family descended from Miles, who was the Marshall of Duke William and who held lands at Caen, Vauceles, and Venoix in Normandy. [3] The Norman conquerors imported a vast number of continental European personal names, such as the name Myle, which largely replaced traditional Old English personal names among the upper and middle classes.

Early Origins of the Myle family

The surname Myle was first found in Lincolnshire where Johannes filius Mile was listed (1150-1160.) Seventy years later, the name would be found in the Pipe Rolls of Berkshire in 1230 as Milo Noyrenuyt. [4] By the time of the Hundredorum Rolls of 1273, the listings in Bedfordshire were the most numerous: William filius Milon; and Milo le Messer. The same rolls listed: Peter Myles in Kent; Wychard Miles in Lincolnshire; and Margery Mylys in Cambridgeshire. [5] The Pipe Rolls of Sussex listed Nicholaus Miles in 1177 and the Subsidy Rolls of Yorkshire listed Nicholaus filius Miles in 1297. And then there was this interesting note confirming the relationship between Milo and Miles: "Another Ralph Miles, a fishmonger, of Bridge Ward (1292 Subsidy Rolls of London), founded a chantry for his late lord Milo, no doubt Miles de Oystergate, fishmonger." [4]

Early History of the Myle family

This web page shows only a small excerpt of our Myle research. Another 93 words (7 lines of text) are included under the topic Early Myle History in all our PDF Extended History products and printed products wherever possible.

A multitude of spelling variations characterize Norman surnames. Many variations occurred because Old and Middle English lacked any definite spelling rules. The introduction of Norman French to England also had a pronounced effect, as did the court languages of Latin and French. Therefore, one person was often referred to by several different spellings in a single lifetime. The various spellings include Miles, Myles and others.

More information is included under the topic Early Myle Notables in all our PDF Extended History products and printed products wherever possible.

Migration of the Myle family to Ireland

Some of the Myle family moved to Ireland, but this topic is not covered in this excerpt. More information about their life in Ireland is included in all our PDF Extended History products and printed products wherever possible.

Migration of the Myle family