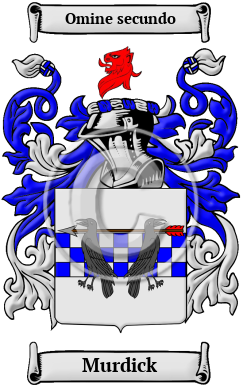 Scotland's western coastal mountains and the desolate Hebrides spawned the line of the Murdick family. The name Murdick was originally a nickname for a person associated with the sea. The name Murdick derives from one of two Gaelic names which have become indistinguishable from each other. The first of these, Muireach, means belonging to the sea or a mariner. The second name is Murchadh, which means sea warrior. [1]

Early Origins of the Murdick family

The surname Murdick was first found in Ayrshire (Gaelic: Siorrachd Inbhir Àir), formerly a county in the southwestern Strathclyde region of Scotland, that today makes up the Council Areas of South, East, and North Ayrshire, where they held a family seat from early times.

"Murdac was Dean of Appleby, Westmorland, 1175. Walter Murdac, Morthaich, or Murdoch was a person of prominence in the reign of William the Lion and figures as witness in several charters and other Murthacs or Murdaks are mentioned about the same time and in the following century. Murdoch, second duke of Albany, executed in 1425, is referred to in English records as: Mordac, Mordake, Mordik, Mordoc, Mordok, Mordyk, Moreduc, Mourdac, and Murthak. William Murdoch (1754-1839), inventor of gas-lighting, was proclaimed a deity by Nassred-din, Shah of Persia, who believed him to be a re-incarnation of Merodach or Marduk, 'god of light.' " [1]

In England, "Robert filius Murdac, and ' one Meurdoch ' occur in Domesday [Book of 1086.]" [2] Another source notes that in Yorkshire, "Murdac, Murdoc, Meurdoch were all listed in the Domesday Book. And this source notes the name was "introduced into Yorkshire before the Conquest by Norwegians from Ireland." [3]

Another source confirms that Murdac, was Dean of Appleby, 32 Henry II (during the 32nd year of King Henry III's reign) [4] and Murdac de Gunton was listed in Warwickshire and Leicestershire, Henry III- Edward I [5]

Early History of the Murdick family

This web page shows only a small excerpt of our Murdick research. Another 160 words (11 lines of text) covering the years 1175, 1214, 1296, 1420, 1680 and are included under the topic Early Murdick History in all our PDF Extended History products and printed products wherever possible.

Spelling and translation were not standardized practices until the last few centuries. Spelling variations are extremely common among early Scottish names. Murdick has been spelled Murdock, Murdoch, Murtoch, Murtough and others.

More information is included under the topic Early Murdick Notables in all our PDF Extended History products and printed products wherever possible.

Migration of the Murdick family to Ireland

Some of the Murdick family moved to Ireland, but this topic is not covered in this excerpt.
Another 57 words (4 lines of text) about their life in Ireland is included in all our PDF Extended History products and printed products wherever possible.

Murdick migration to the United States +

Settlers from Scotland put down roots in communities all along the east coast of North America. Some moved north from the American colonies to Canada as United Empire Loyalists during the American War of Independence. As Clan societies and highland games started in North America in the 20th century many Scots rediscovered parts of their heritage. Early North American records indicate many people bearing the name Murdick were among those contributors:

Murdick Settlers in United States in the 19th Century