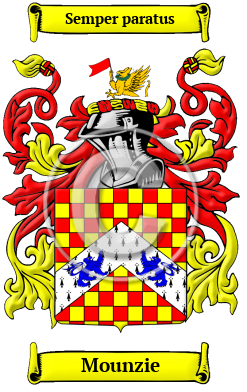 Mounzie is a name that was brought to England by the ancestors of the Mounzie family when they migrated to the region after the Norman Conquest in 1066. The Mounzie family lived in Monceaux, Normandy. "The 'Sire de Monceals' of the Roman de Ron. He 'descended from the ancient lords of Maers and Monceaux, Counts of Nevers. Landric IV. became Count of Nevers c. 990 by marriage, and had a younger son Landric of Nevers, Baron of Monceaux, grandfather of William de Monceaux, who is mentioned by Wace in 1066. He appears as William de Moncellis in the Eastern Domesday, and as William de Nevers in Norfolk 1086. [1] His descendants occur in Sussex, but chiefly in Yorkshire and Lincoln.' " [2]

Early Origins of the Mounzie family

The surname Mounzie was first found in Sussex where they held a family seat as lords of the manor of Herstmonceux. They were descended from the ancient Lords of Maers and Monceaux, Counts of Nevers in Normandy. They were granted lands in Sussex and those branches, retaining the name Monceaux became the Lords of Monson, the Viscounts Castlemaine, and the Lords Sondes.

Early History of the Mounzie family

Spelling variations in names were a common occurrence in the eras before English spelling was standardized a few hundred years ago. In the Middle Ages, even the literate regularly changed the spellings of their names as the English language incorporated elements of French, Latin, and other European languages. Many variations of the name Mounzie have been found, including Mounsey, Mounsie, Mouncie, Mouncey, Mouncy, Muncey, Muncie, Mounceaus, Monceaux, Monceux, Monse and many more.

Outstanding amongst the family at this time was Messenger Monsey (1693-1788), physician, born in 1693, was eldest son of Robert Monsey, some time rector of Bawdeswell, Norfolk, but ejected as a nonjuror, and his wife Mary, daughter of the Rev. Roger Clopton. (The family of Monsey or Mounsey is supposed to be derived from the Norman house of De Monceaux.) Monsey was educated at home, and afterwards at Pembroke College, Cambridge, where he graduated B.A. in 1714. He studied medicine at Norwich under Sir Benjamin Wrench, and was admitted extra licentiate of...
Another 92 words (7 lines of text) are included under the topic Early Mounzie Notables in all our PDF Extended History products and printed products wherever possible.

Migration of the Mounzie family

For many English families, the social climate in England was oppressive and lacked opportunity for change. For such families, the shores of Ireland, Australia, and the New World beckoned. They left their homeland at great expense in ships that were overcrowded and full of disease. Many arrived after the long voyage sick, starving, and without a penny. But even those were greeted with greater opportunity than they could have experienced back home. Numerous English settlers who arrived in the United States and Canada at this time went on to make important contributions to the developing cultures of those countries. Many of those families went on to make significant contributions to the rapidly developing colonies in which they settled. Early North American records indicate many people bearing the name Mounzie were among those contributors: Margaret Mouncey, who settled in Pennsylvania in 1697; Jean Mouncy who settled in Charles Town South Carolina in 1772; Joseph Monsey, who arrived in Ontario in 1871.