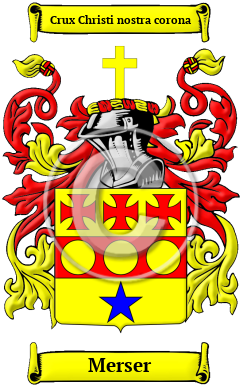 The Merser surname derives from the Old French "mercier," in turn from the Late Latin "mercarius," both meaning merchandise. In Middle English, Merser was an occupational name for a trader who dealt in textiles.

Interestingly, not all of the family emigrated to England during the Conquest or shortly thereafter as the Magni Rotuli Scaccarii Normanniae lists "Hubert, Hugh, Richard, Odo Mercer or Mercier [in] Normandy 1180-95. Bertin and Buno le Mercier [were also found in] Normandy [at that time.]" [1]

Early Origins of the Merser family

The surname Merser was first found in Northumberland but as a frequent occupational name, many records were found in various parts of ancient England. In fact, Serio le Mercer as Lord Mayor of London in 1215 and again from 1218 to 1221. The Hundredorum Rolls of 1273 list: Jordan de Mercer, Lincolnshire; Adelard le Mercer, Oxfordshire; and Ketel le Mercer, Cambridgeshire. The Yorkshire Poll Tax Rolls of 1379 have only one listing of the name: Thomas Mercer. [2]

Without a doubt, Scotland holds the most history for this family. One of the first records there was William Mercer or le Mercer who witnessed two charters in favor of the Abbey of Kelso, c. 1200. A few years later, "Aleumnus Mercer was party with twenty-three others to a bond given by Alexander 11 to Henry III in 1244 to keep the peace. He had a grant of Tillicoultry from Walter, son of Alan. His son and successor of the same name resigned his lands into the king's hands in 1261. A curious story of two Mercers appears in English records, which throws an interesting sidelight on the law of the period. In 1279 'a man unknown was housed at Morpathe (Morpeth) with Geoffrey and William, the mercers of Scotland. The stranger rose through the night and stole their goods to the value of 30s., and instantly fled to Cotinwode, followed by William, who slew him in his flight. Both withdrew themselves and are not discredited. They may return if they will, but their chattels are confiscated for flight' (Apparently it was lawful to pursue a thief with hue and cry and do summary justice on him if found with the goods in his possession. The Mercers erred in not pursuing the thief in the recognized way.) " [3]

Early History of the Merser family

Spelling variations of this family name include: Mercer, Mercier, Merser, Marcer and others.

Notable amongst the family name during their early history was William Mercer (c.1605-1675), a Scottish poet and army officer in the Engagers army; and John Mercer (1791-1866) English dye chemist who is best remembered...
Another 33 words (2 lines of text) are included under the topic Early Merser Notables in all our PDF Extended History products and printed products wherever possible.

Migration of the Merser family to Ireland

Some of the Merser family moved to Ireland, but this topic is not covered in this excerpt.
Another 67 words (5 lines of text) about their life in Ireland is included in all our PDF Extended History products and printed products wherever possible.

Merser Settlers in Australia in the 19th Century

Merser Settlers in New Zealand in the 19th Century

Merser Settlers in West Indies in the 17th Century