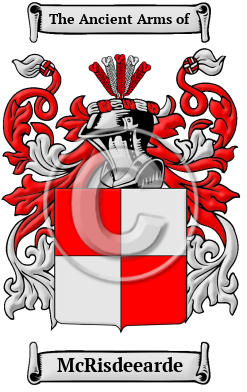 Early Origins of the McRisdeearde family

The surname McRisdeearde was first found in Norfolk, where they held a family seat as Lords of the Manor of Thwaite near Erpingham in that shire. Originally of Le Thuit, Eure in the Canton of Les Adnelys, before the Norman Conquest in 1066, Ralph del Tuit was described as 'the man' of Berenger de Todeni, son of Duke Robert of Normandy. After the Conquest, Ralph acquired lands from the Abbott of Holme near Erpingham, lands which he called Tuit, recorded in the Domesday Book in 1086 as Thwaite. However, the family also retained the name Tuite. In 1172 Risteárd de Tiúit (Richard La Tuite) was a member of Richard de Clare, 2nd Earl of Pembroke's Irish invasion force. He built one of the largest Motte and Bailey settlements in Ireland at Granard in 1199 and rose to become Lord Chief Justice of Ireland.

Early History of the McRisdeearde family

During the lifetime of an individual person, his name was often spelt by church officials and medieval scribes the way it sounded. An examination of the many different origins of each name has revealed many spelling variations for the name: Tuit, Tuite, Tute, Tuitum, McRisdeard and others.

Notable amongst the family up to this time was the Tuite Baronetcy, of Sonna (An Sonnach) in the County of Westmeath which includes: Sir Oliver Tuite, 1st Baronet (c. 1588-1642)...
Another 30 words (2 lines of text) are included under the topic Early McRisdeearde Notables in all our PDF Extended History products and printed products wherever possible.

Migration of the McRisdeearde family

In the mid-19th century, Ireland experienced one of the worst periods in its entire history. During this decade in order to ease the pressure of the soil, which was actually depleted by the effects of the previous years' grain crops, landowners forced tenant farmers and peasants onto tiny plots of land that barely provided the basic sustenance a family required. Conditions were worsened, though, by the population of the country, which was growing fast to roughly eight million. So when the Great Potato Famine of the mid-1840s hit, starvation and diseases decimated the population. Thousands of Irish families left the country for British North America and the United States. The new immigrants were often accommodated either in the opening western frontiers or as cheap unskilled labor in the established centers. In early passenger and immigration lists there are many immigrants bearing the name McRisdeearde: James Tuite who landed in Pennsylvania in 1856; James Tute settled in Virginia in 1652.