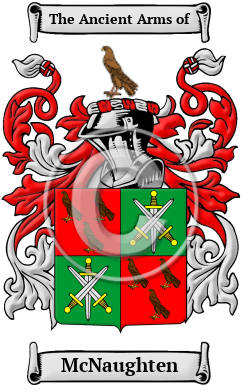 Early Origins of the McNaughten family

The surname McNaughten was first found in Clare (Irish: An Clár) located on the west coast of Ireland in the province of Munster, where they held a family seat as an important Dalcassian sept of the Ui Maine related to the Mulallys. The Lallys and the O'Naghtens were in turn chiefs of the Moenmoy from which they were driven in the English invasion of 1172. They settled in Tollendal where they became tenants of Lord Bermingham. Here they became Chiefs of the Fews. Neachtan, the progenitor, about 850 A.D., was the grandson of Aeneas Lally. Irish history was greatly influenced by the Norman invasion of 1172, and thereafter, the surnames of Irish Gaelic clanns and septs and many of the Norman families became almost indistinguishable. Great confusion reigns between the Scottish Clan McNaughten (vide). Some learned scholars of the Irish McNaghtens claim to be descended of the Pictish race, being one of three clans of the old Maormors of Moray, Kings of the Picts who claimed title to the Kingdom of Scotland. Descended from Neachtan by five generations was Connor Catha Brian O'Neachtain who fought beside Brian Boru at Clontarf in 1014.

Early History of the McNaughten family

This web page shows only a small excerpt of our McNaughten research. Another 84 words (6 lines of text) covering the year 5000 is included under the topic Early McNaughten History in all our PDF Extended History products and printed products wherever possible.

More information is included under the topic Early McNaughten Notables in all our PDF Extended History products and printed products wherever possible.

McNaughten migration to the United States +

McNaughten Settlers in United States in the 19th Century