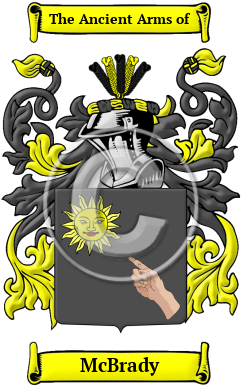 Early Origins of the McBrady family

The surname McBrady was first found in Galway (Irish: Gaillimh) part of the province of Connacht, located on the west coast of the Island, and County Clare where they held a family seat from ancient times.

They were descended from Olioll Olum, King of Munster who reigned about 130 A.D. and descended through a line of Chiefs and Kings to John O'Grady, alias O'Brady, who died in 1332 in the Clann territories of Fassaghmore in the county of Clare. His son, Sir Denis O'Grady alias O'Brady of Fassaghmore was knighted by King Henry VI of England.

This great confusion of names continued into the 14th and 15th century and to make matters even more confusing the line frequently reverted from one spelling to the other. The Clann seat became established at Kilballyowen in County Limerick, and the present Chief of the Gradys (or Bradys) is one of the few Chiefs recognized in Ireland. He is Lieutenant Colonel Gerald Vogors de Courcy O'Grady. They were settled in Glenstal Abbey. Many of the name were also found in Cavan.

Early History of the McBrady family

This web page shows only a small excerpt of our McBrady research. Another 53 words (4 lines of text) covering the years 1454, 1710, 1710, 1752 and 1827 are included under the topic Early McBrady History in all our PDF Extended History products and printed products wherever possible.

The scribes who created documents long before either the Gaelic or English language resembled their standardized versions of today recorded words as they sounded. Consequently, in the Middle Ages the names of many people were recorded under different spellings each time they were written down. Research on the McBrady family name revealed numerous spelling variations, including Grady, Brady, O'Grady, O'Brady, Braidy, Graidy, Bradie, Braidie, Braydy, Braydie, Gradie, Graidie, Graydy, Graydie, Bradigan, O'Bradigan and many more.

Notable amongst the family name at this time was Sir Denis O'Brady; Andrew MacBrady, was the first bishop of Kilmore in 1454; Fiachra MacBrady (c.1710), Gaelic poet; James Bernard MacBrady, Count of the Holy Roman Empire...
Another 36 words (3 lines of text) are included under the topic Early McBrady Notables in all our PDF Extended History products and printed products wherever possible.

McBrady migration to the United States +

Under the rule of England, land ownership in Ireland changed dramatically, and many native Irish families found themselves renting out land to farm from absentee owners. This was one of the prime reasons that immigration to North America began in the late 18th century: Irish farmers dreamed of owning their own parcel of land to work for themselves. At this point, the immigrants were at least of modest means for the passage across the Atlantic was often quite dear. In the 1840s the Great Potato Famine created an exodus of people of quite different means. These people were most often destitute: they either sold anything they had to gain a passage or they were sponsored by philanthropic societies. Many of these immigrants were sick from disease and starvation: as a result many did not survive the long transatlantic journey. Although those settlers that did survive were often despised and discriminated against by people already established in these nations, they were critical to rapid development of the powerful industrial nations of the United States and the country that would later become known as Canada. An examination of immigration and passenger lists shows many persons bearing the name of McBrady or one of its variants:

McBrady Settlers in United States in the 19th Century

McBrady Settlers in United States in the 20th Century

McBrady Settlers in Canada in the 20th Century