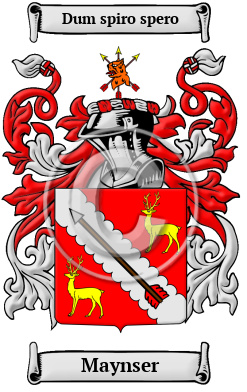 The Maynser surname is generally thought to have come from the male personal name Manasseh, which is ultimately from the Hebrew Menashe meaning "one who causes to forget." Some instances of the surname may have occupational roots, coming from Anglo-Norman French word "mance," meaning "handle," and used as a name for someone who made handles for tools or implements. [1]

Early Origins of the Maynser family

The surname Maynser was first found in Westmorland at Mansergh, a chapelry, in the parish of KirkbyLonsdale, union of Kendal, Lonsdale ward. [2] Some of the first records of the family include Thomas de Mansergh, temp. 12 Edward II., and John de Mansergh, 7 Richard II. [3] Many years later, The Lancashire Wills at Richmond list: Thomas Manser, or Mansergh, of Burton, 1580; George Mansergh, 1573 and Elizabeth Manzer, of Barwicke, 1608. As a personal name the first listings were Manasserus de Danmartin who was listed in Suffolk in 1166; Maserus filius Joi who was found in the Pipe Rolls of Lincolnshire in 1186; and Maneserus Judeus, also listed in the Pipe Rolls of Lincolnshire in 1191. "There can be little doubt that this must be the Hebrew Manasseh 'one who causes to forget,' used undoubtedly of Jews." [1] Walter Manser was listed in the Liber Feodorum in Suffolk in 1250 and Alan Mauncer was listed in the Subsidy Rolls of Sussex in 1296. Later John Maunser was listed in the Subsidy Rolls of Essex in 1327. "The Domesday Book tenant-in-chief Manasses was presumably a Norman." [1] The name continued to flourish in Normandy after the Conquest as evidenced by Richard Manesier who was listed there in 1198. [4]

Early History of the Maynser family

This web page shows only a small excerpt of our Maynser research. Another 168 words (12 lines of text) covering the years 1510, 1600, 1177, 1552, 1455 and 1487 are included under the topic Early Maynser History in all our PDF Extended History products and printed products wherever possible.

It is only in the last few hundred years that the English language has been standardized. For that reason, early Anglo-Saxon surnames like Maynser are characterized by many spelling variations. As the English language changed and incorporated elements of other European languages, even literate people changed the spelling of their names. The variations of the name Maynser include: Manserg, Mansergh, Mansbergh, Manser, Mansur, Mansurg, Mansurgh and many more.

More information is included under the topic Early Maynser Notables in all our PDF Extended History products and printed products wherever possible.

Migration of the Maynser family

Many English families tired of political and religious strife left Britain for the new colonies in North America. Although the trip itself offered no relief - conditions on the ships were extremely cramped, and many travelers arrived diseased, starving, and destitute - these immigrants believed the opportunities that awaited them were worth the risks. Once in the colonies, many of the families did indeed prosper and, in turn, made significant contributions to the culture and economies of the growing colonies. An inquiry into the early roots of North American families has revealed a number of immigrants bearing the name Maynser or a variant listed above: Tho Manser, who came to Virginia in 1653; John Manser, who came to Maryland in 1680; Allen Manser, who arrived in America in 1745; James Manser, who was deported to America in 1761.