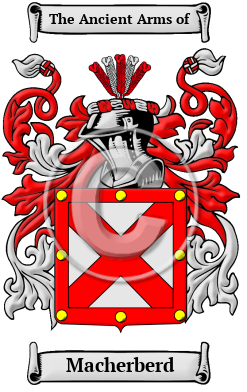 The name Macherberd came to England with the ancestors of the Macherberd family in the Norman Conquest of 1066. The Macherberd family lived in Gloucestershire. Their name, however, is of Norman derivation, and refers to the proximity of their former place of residence to the sea. Macherberd is a latter variation of the earlier local surname de la Mare, which literally translates as of the sea, or from the sea. Another source claims the name originated from the "ancient Forest of Delamere, foresta de la Mare," and literally meant "forest of the lake." [1]

Early Origins of the Macherberd family

The surname Macherberd was first found in Gloucestershire where Guillaume (William) de La Mare was a tenant in Chief of lands in both this county and in Herefordshire. He also held lands in 1086 A.D. in Wiltshire and Hertfordshire as a sub tenant under the name William de La Mare. [2] He held many lordships. He came from Lamare at St. Opportune in the arrondisement of Pont Audemer in Normandy where his castle was built on piles on the border of the lake. [3]

William de La Mare (fl. 1272-1279) was an English Franciscan theologian who is known to have preached in Lincoln.

Early History of the Macherberd family

Multitudes of spelling variations are a hallmark of Anglo Norman names. Most of these names evolved in the 11th and 12th century, in the time after the Normans introduced their own Norman French language into a country where Old and Middle English had no spelling rules and the languages of the court were French and Latin. To make matters worse, medieval scribes spelled words according to sound, so names frequently appeared differently in the various documents in which they were recorded. The name was spelled Delamere, Delamare, DeleMere, DelaMare, Delemare, Delamare, Delamere, Delemare, DeLaMar, DeLaMarre, DeLaMaior, FitzNorman, Fitznorman, Delamore, Dalamaire, Delamar, Delamare, Delmore, Lamere, MacHerbert and many more.

Outstanding amongst the family at this time was William De La Mare (died c.1285), English Franciscan theologian; Sir Peter de la Mare (died c. 1387), High Sheriff of Herefordshire in 1372, best remembered as the Presiding Officer of the House of Commons during the Good Parliament of 1376; and Sir John Delamare (c...
Another 52 words (4 lines of text) are included under the topic Early Macherberd Notables in all our PDF Extended History products and printed products wherever possible.

Migration of the Macherberd family to Ireland

Some of the Macherberd family moved to Ireland, but this topic is not covered in this excerpt. More information about their life in Ireland is included in all our PDF Extended History products and printed products wherever possible.

Migration of the Macherberd family

Because of this political and religious unrest within English society, many people decided to immigrate to the colonies. Families left for Ireland, North America, and Australia in enormous numbers, traveling at high cost in extremely inhospitable conditions. The New World in particular was a desirable destination, but the long voyage caused many to arrive sick and starving. Those who made it, though, were welcomed by opportunities far greater than they had known at home in England. Many of these families went on to make important contributions to the emerging nations of Canada and the United States. Analysis of immigration records indicates that some of the first North American immigrants bore the name Macherberd or a variant listed above: Joseph Delamore who settled in Charles Town [Charleston], South Carolina in 1821; G. Delamare settled in New Orleans La. in 1822; John Delamaire settled in Maryland in 1674.