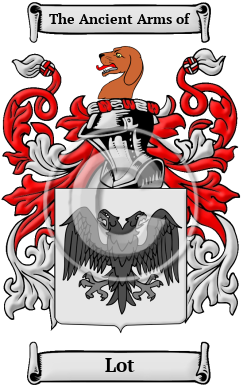 The Lot surname is derived from a medieval given name of uncertain origins.

Early Origins of the Lot family

The surname Lot was first found in Kent where the Pipe Rolls of 1162 include and entry for Alwin Loth. Over one hundred years later, William Lot was listed in the Hundredorum Rolls of 1273 in Suffolk. The same rolls included: John Lotte in Norfolk; and Andrew, John Lote in Cambridgeshire. The same John Lotte was listed in the Feet of Fines for Essex in 1317. Richard and William atte Lote were listed in the Subsidy Rolls for Sussex in 1332 and the Subsidy Rolls for Surrey in 1332. "There is no evidence for the early use of the Biblical Lot in England, but the first form may be this in its French form Loth which was common in Brittany." [1]

Another source claims the name is for someone who was a "dweller on the apportioned share of land, i.e., the allotted land" [2] and another claims that it is an Anglo-Saxon name for "lote" meaning "crafty" or perhaps from the Anglo-Saxon "hlot", "a caster of lots, a fortune-teller." [3]

Early History of the Lot family

This web page shows only a small excerpt of our Lot research. Another 99 words (7 lines of text) covering the years 1455 and 1487 are included under the topic Early Lot History in all our PDF Extended History products and printed products wherever possible.

Spelling variations of this family name include: Lot, Lott, Loth, Lots and others.

More information is included under the topic Early Lot Notables in all our PDF Extended History products and printed products wherever possible.

Lot migration to the United States +

Lot Settlers in United States in the 17th Century

Lot Settlers in United States in the 18th Century

Lot Settlers in New Zealand in the 19th Century