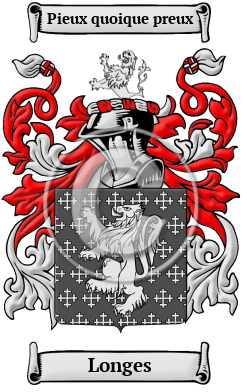 The proud Norman name of Longes was developed in England soon after Norman Conquest of England in 1066. It was name for a person who was tall, big, or lanky. [1] The English Longes family is descended from a Norman noble of Preux in Normandy. Also, known as Petrus de Longa, the family held estates in Normandy before and after the Conquest as in 1198 Emma de Longues was still listed in Normandy at that time. [2]

The family name Longes became popular in England after the Norman Conquest, when William the Conqueror gave his friends and relatives most of the land formerly owned by Anglo-Saxon aristocrats.

Early Origins of the Longes family

The surname Longes was first found in Wiltshire and Gloucestershire.

"It has evidently more than one home, the principal one being in Wilts [(Wiltshire)] and the neighbouring county of Gloucester; there is a second in Kent, and a third in Norfolk and Suffolk and their vicinity. According to Camden, the Wiltshire Longs are descended from a very tall attendant of Lord Treasurer Hungerford. However, we know that the Longs have been established in this part of England for many centuries, since we learn from the Hundredorum Rolls that the name was numerous in Oxfordshire, as well as in Cambridgeshire, in the reign of Edward I." [3]

Another source explores the story further: "one of the family of Preux, an attendant on Lord Treasurer Hungerford, from his great height, acquired the sobriquet of Long Henry. On his marriage to a lady of quality he transposed this appellation to Henry Long, and became the founder of the Longs of Wiltshire." [4]

As if to underscore Bardsley's comments above, Walter Hungerford, 1st Baron Hungerford (1378-1449) was made Lord High Treasurer in 1425, so the reader needs to take the rather romantic story of "Long Henry" as an oral tradition only.

In the aforementioned Hundredorum Rolls of 1273, we found early spellings of the name in various shires: Henry le Longe in Buckinghamshire; John le Longe in Huntingdonshire; and Walter le Longe in Shropshire. The Yorkshire Poll Tax Rolls of 1379 listed Johanna Long as residing there at that time. [5]

Much further to the north in Scotland, one of the first listing there was Johannes Longus who witnessed a grant to the Hospital of Soltre, c. 1180-1214. William Longus held land near Lyntonrothrik, c. 1200 and , Adam Long appears in Dumfriesshire, c. 1259. A few years later, Gregory le Long was a burgess of Dundee in 1268 and William Long witnessed confirmation of Snawdoun to Dryburgh c. 1350. [6]

Early History of the Longes family

Spelling variations in names were a common occurrence in the eras before English spelling was standardized a few hundred years ago. In the Middle Ages, even the literate regularly changed the spellings of their names as the English language incorporated elements of French, Latin, and other European languages. Many variations of the name Longes have been found, including Long, Longe and others.

Migration of the Longes family to Ireland

Some of the Longes family moved to Ireland, but this topic is not covered in this excerpt.
Another 137 words (10 lines of text) about their life in Ireland is included in all our PDF Extended History products and printed products wherever possible.

Migration of the Longes family

For many English families, the social climate in England was oppressive and lacked opportunity for change. For such families, the shores of Ireland, Australia, and the New World beckoned. They left their homeland at great expense in ships that were overcrowded and full of disease. Many arrived after the long voyage sick, starving, and without a penny. But even those were greeted with greater opportunity than they could have experienced back home. Numerous English settlers who arrived in the United States and Canada at this time went on to make important contributions to the developing cultures of those countries. Many of those families went on to make significant contributions to the rapidly developing colonies in which they settled. Early North American records indicate many people bearing the name Longes were among those contributors: John Long who arrived in Boston in 1635; Edward Long, who settled in Virginia in 1649; Henry Long, who settled in Virginia in 1774; James Long, who settled in Virginia in 1642.