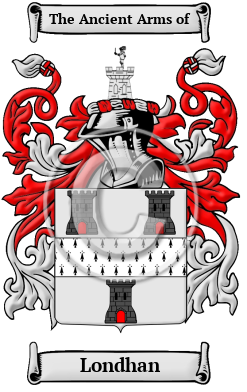 The origins of the Londhan name lie with England's ancient Anglo-Saxon culture. It comes from when the family lived in the region of London. Londhan is a habitation name from the broad category of surnames that were derived from place-names. They were derived from pre-existing names for towns, villages, parishes, or farmsteads. Other local names are derived from the names of houses, manors, estates, regions, and entire counties.

Early Origins of the Londhan family

The surname Londhan was first found in Berkshire, but there are two distinct thoughts as to the origin of the name.

The first is that it was derived from the Anglo-Saxon name Lunden or the Middle Welsh names Llundein or Lundein, as mentioned above. [1] In this case, it may have been a tribal or personal name. [2]

The second thought is that the family were in fact, Norman. In this scenario, the first record of the family was "William de Londres, one of the conquerors of Glamorgan, 1090, ancestor of the Lords Loundres of Naas." [3]

Continuing this thread, we found very early entries for the family in Bodmin, Cornwall. "The convent to which this refectory belonged, is said to have been founded originally by John de London, under the immediate patronage of Edmund Earl of Cornwall. The time of its foundation is dated by William of Worcester in the year 1229; but he calls its original founder, John, son of Ralph, lord of Kayryshays." [4]

This latter entry bodes well for the aforementioned Welsh entry. So as to complicate matters, Thomas de London settled in Scotland before 1163 and William and Robert London were listed in Normandy 1180-95, according to the Magni Rotuli Scaccarii Normanniae. [3]

Early History of the Londhan family

This web page shows only a small excerpt of our Londhan research. Another 102 words (7 lines of text) covering the years 1214, 1640 and 1714 are included under the topic Early Londhan History in all our PDF Extended History products and printed products wherever possible.

Before the last few hundred years, the English language had no fast system of spelling rules. For that reason, spelling variations are commonly found in early Anglo-Saxon surnames. Over the years, many variations of the name Londhan were recorded, including London, Londen, Lunnen, Lundin, Lunden, Londoner, Londner and many more.

Another 30 words (2 lines of text) are included under the topic Early Londhan Notables in all our PDF Extended History products and printed products wherever possible.

Migration of the Londhan family

To escape oppression and starvation at that time, many English families left for the "open frontiers" of the New World with all its perceived opportunities. In droves people migrated to the many British colonies, those in North America in particular, paying high rates for passages in cramped, unsafe ships. Although many of the settlers did not make the long passage alive, those who did see the shores of North America perceived great opportunities before them. Many of the families that came from England went on to make essential contributions to the emerging nations of Canada and the United States. Research into various historical records revealed some of first members of the Londhan family emigrate to North America: John London who settled in Virginia in 1636; Humphrey London settled in Virginia in 1639; Richard London settled in New England in 1654; Alice London settled in Barbados in 1665.