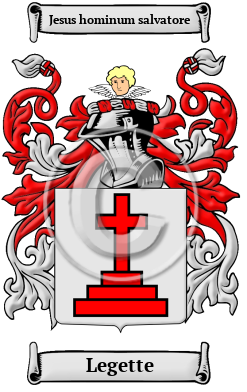 The name Legette is derived from the Middle English and Old French word "legat," and the Latin legatus [1] meaning "ambassador, deputy." [2]

"Often a pageantname. In 1377, in the procession for the entertainment of Richard, the young son of the Black Prince, was ‘one stately attired like a pope, whom followed twenty-four cardinals, and after them eight or ten with black visors, not amiable, as if they had been legates from some foreign prince’ " [3]

Early Origins of the Legette family

The surname Legette was first found in Somerset where the Latin entry Hugolinus Legatus was recorded in 1084, two years before the Domesday Book of 1086.

However, another source explores this previous entry in more detail. "At the date of the Domesday Survey, Hervey Legatus was a tenant in capite in co. Bucks, and Richard Legatus had the same tenure in co. Gloucester." [1]

Peter Legat was recorded in the Pipe Rolls for Cornwall in 1199 and later, Ralph le Legat was listed in the Assize Rolls for Northumberland in 1279. Richard Leget was found in the Yorkshire Poll Tax Rolls of 1379. [3]

Hugh Legat ( fl. 1400), was a Benedictine, a native of Hertfordshire, was not improbably a member of the family which held a manor at Abbots Walden in that county, belonging to the monks of St. Albans. Bale says that Hugh Legat was brought up in the monastery school at St. Albans, displayed a strong love for learning, and went with the abbots leave to pursue his studies at Oxford, where, in the Benedictine hostelry of Gloucester Hall, St. Albans, like other abbeys of its order, had a house for its own scholars. [4]

In Scotland, "Adam Legate who rendered to Exchequer the accounts of the bailies of Stirling in 1406 appears again in 1412 as burgess of the town. Walter Leget or Legat of Scotland had safe conducts into England in 1421-1422, and Master John Legat had a safe conduct to pass to Rome in 1448. Thomas Legat of Tayn witnessed a notarial instrument, 1477." [5]

Early History of the Legette family

Notable among the family at this time was Helming Leget (died 1412), of Tottenham, Middlesex and Black Notley, Essex, an English politician, appointed Sheriff, Essex and Hertfordshire for...
Another 27 words (2 lines of text) are included under the topic Early Legette Notables in all our PDF Extended History products and printed products wherever possible.

In the United States, the name Legette is the 11,505th most popular surname with an estimated 2,487 people with that name. [6]

Migration of the Legette family to Ireland

Some of the Legette family moved to Ireland, but this topic is not covered in this excerpt.
Another 59 words (4 lines of text) about their life in Ireland is included in all our PDF Extended History products and printed products wherever possible.

Legette migration to the United States +

Legette Settlers in United States in the 19th Century