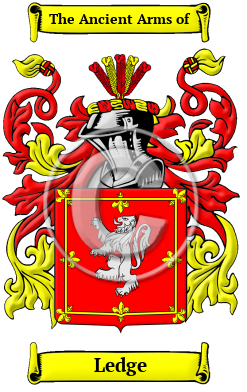 Early Origins of the Ledge family

The surname Ledge was first found in Suffolk where they held a family seat from very early times and were granted lands by Duke William of Normandy, their liege Lord, for their distinguished assistance at the Battle of Hastings in 1066 A.D.

Early History of the Ledge family

Endless spelling variations are a prevailing characteristic of Norman surnames. Old and Middle English lacked any definite spelling rules, and the introduction of Norman French added an unfamiliar ingredient to the English linguistic stew. French and Latin, the languages of the court, also influenced spellings. Finally, Medieval scribes generally spelled words according to how they sounded, so one person was often referred to by different spellings in different documents. The name has been spelled Lodge, Loge and others.

Another 38 words (3 lines of text) are included under the topic Early Ledge Notables in all our PDF Extended History products and printed products wherever possible.

Ledge Settlers in Australia in the 19th Century