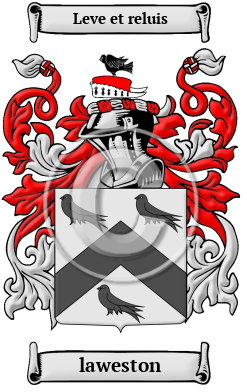 The ancient Anglo-Saxon surname laweston came from the baptismal name Law, which was a short form of Lawrence. [1] Baptismal names are a form of patronymic surnames, and come from religious and vernacular naming traditions. In this case, the surname laweston was originally derived from the given name of the father of the bearer.

Early Origins of the laweston family

The surname laweston was first found in Yorkshire where some of the first records of the family were found in the Yorkshire Poll Tax Rolls of 1379: Willelmus Lauson, Henricus Laweson and Agnes Law-wyf. [2] "The patriarch of the family was John Lawson, who temp. Henry II. was lord of Fawlesgrave, Yorkshire and from him the existing Baronet is lineally descended." [3]

Further to the north in Scotland, the name was literally derived from "son of Lawrence." Early records include: "Richard Laurence of Byker of Lanarkshire who rendered homage to King Edward I in 1296; Richard Lawson, who was canon of St. Giles, Edinburgh, and laird of Grothill in 1370; John Lawson de Lyntoun, a tenant under Douglas in Linton in 1376; and Ady Lawsoun, a forestaller in Aberdeen in 1402. [4]

Early History of the laweston family

Sound was what guided spelling in the essentially pre-literate Middle Ages, so one person's name was often recorded under several variations during a single lifetime. Also, before the advent of the printing press and the first dictionaries, the English language was not standardized. Therefore, spelling variations were common, even among the names of the most literate people. Known variations of the laweston family name include Lawson, Laweson and others.

Notables of this surname at this time include: Sir Wilfred Lawson; Sir John Lawson (ca. 1615-1665), English Naval Officer; Sir Wilfrid Lawson, 1st Baronet, of Isel (c 1610-1688) was an English landowner and politician, Member of Parliament for...
Another 38 words (3 lines of text) are included under the topic Early laweston Notables in all our PDF Extended History products and printed products wherever possible.

Migration of the laweston family to Ireland

Some of the laweston family moved to Ireland, but this topic is not covered in this excerpt.
Another 59 words (4 lines of text) about their life in Ireland is included in all our PDF Extended History products and printed products wherever possible.

Migration of the laweston family

For political, religious, and economic reasons, thousands of English families boarded ships for Ireland, the Canadas, the America colonies, and many of smaller tropical colonies in the hope of finding better lives abroad. Although the passage on the cramped, dank ships caused many to arrive in the New World diseased and starving, those families that survived the trip often went on to make valuable contributions to those new societies to which they arrived. Early immigrants bearing the laweston surname or a spelling variation of the name include: Christopher Lawson arrived in Virginia in 1623; Lettice Lawson settled in Virginia in 1638; Thomas Lawson settled in Virginia in 1623; Charles, Christopher, David, George, Henry, James, John, Joseph, Samuel, Thomas and William Lawson, all arrived in Philadelphia between 1840 and 1860..