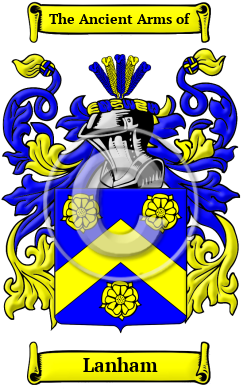 The origins of the Lanham name come from when the Anglo-Saxon tribes ruled over Britain. The name Lanham was originally derived from a family having lived in the region of Langham in various counties throughout England. [1]

"There are places called Langham in cos. Essex, Suffolk, Norfolk, and Rutland. The baronet's family originated in the last-mentioned county. In 10. Edward I. Henry de Langham held three carucates of land in Langham, and from him the pedigree is regularly deduced." [2]

Early Origins of the Lanham family

Over in Suffolk, Lambert de Langham was found there in the Subsidy Rolls for 1283. [3]

Simon Langham (d. 1376), Archbishop of Canterbury, Chancellor of England, and Cardinal; "was born at Langham in Rutland. To judge from the wealth which he seems to have possessed, he was probably a man of good birth. He became a monk at St. Peter's, Westminster, possibly about 1335, but is not mentioned until 1346, when he represented his house in the triennial chapter of the Benedictines held at Northampton. In April 1349 he was made prior of Westminster, and on the death of Abbot Byrcheston on 15 May following succeeded him as abbot." [5]

Early History of the Lanham family

Before English spelling was standardized a few hundred years ago, spelling variations of names were a common occurrence. Elements of Latin, French and other languages became incorporated into English through the Middle Ages, and name spellings changed even among the literate. The variations of the surname Lanham include Lanham, Landham, Lavenham, Lavingham and others.

Notables of this surname at this time include: Richard Lavenham or Lavyngham (fl. 1380), Carmelite, was "born at Lavenham, Suffolk, and, after becoming a Carmelite friar at Ipswich, studied at Oxford, where he is said to have graduated D.D.; but in the colophon to his tract against John Purvey he is called simply 'magister' (Fasciculi Zizaniorum, p. 399, Rolls Ser.). Lavenham was afterwards prior of the Carmelite house at Bristol. He was confessor to Richard II, and a friend of Simon Sudbury, archbishop of Canterbury. De Villiers, on the authority of a reference in Polydore Vergil (p. 403, ed. 1557) to...
Another 166 words (12 lines of text) are included under the topic Early Lanham Notables in all our PDF Extended History products and printed products wherever possible.

In the United States, the name Lanham is the 3,124th most popular surname with an estimated 9,948 people with that name. [6]

Lanham migration to the United States +

Lanham Settlers in United States in the 17th Century

Lanham Settlers in United States in the 18th Century

Lanham Settlers in United States in the 19th Century

Lanham Settlers in New Zealand in the 19th Century

Suggested Readings for the name Lanham +