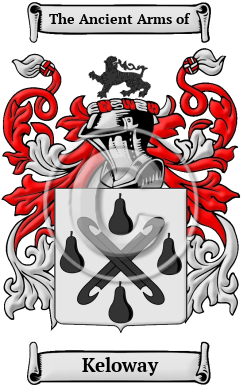 The name Keloway is of Anglo-Saxon origin and came from when the family lived in a small settlement in either Devon or Cornwall. Thus, Keloway is a habitation surname derived from the place, named Callway or Calway. [1]

Alternatively, the name Keloway is a habitational name originally derived from the place name Caillouet-Orgeville in Eure, France. This place name comes from the Old Northern French word "cail(ou)," meaning "a pebble." [2] [3]

Early Origins of the Keloway family

The surname Keloway was first found in Gloucestershire where Philip de Chailewai was listed in the Pipe Rolls of 1165. A few years later, Thomas de Kaillewey was found in Warwickshire in 1242 and in the same year William Callewey was in Devon. [3]

Early History of the Keloway family

It is only in the last few hundred years that the English language has been standardized. For that reason, early Anglo-Saxon surnames like Keloway are characterized by many spelling variations. As the English language changed and incorporated elements of other European languages, even literate people changed the spelling of their names. Scribes and monks in the Middle Ages spelled names they sounded, so it is common to find several variations that refer to a single person. The variations of the name Keloway include: Callaway, Kelloway, Kellaway, Calloway and others.

Outstanding amongst the family at this time was Robert Keilway, Kellway or Kaylway (1497-1581), legal reporter, "was in 1543 the recipient of a grant of the wardship and marriage of Eliz. and Anne Whittocksmede (Pat. Roll, 35 Henry VIII, p. 2), and subsequently of many other minors, a privilege from which he no doubt reaped considerable profit. In 1547 he was autumn reader at the Inner Temple, and in May of that year surveyor of the court of wards and liveries. In September 1547 he, with Lord St. John, was appointed to inquire into the state of the crown revenues, and...
Another 161 words (12 lines of text) are included under the topic Early Keloway Notables in all our PDF Extended History products and printed products wherever possible.

Migration of the Keloway family

Many English families tired of political and religious strife left Britain for the new colonies in North America. Although the trip itself offered no relief - conditions on the ships were extremely cramped, and many travelers arrived diseased, starving, and destitute - these immigrants believed the opportunities that awaited them were worth the risks. Once in the colonies, many of the families did indeed prosper and, in turn, made significant contributions to the culture and economies of the growing colonies. An inquiry into the early roots of North American families has revealed a number of immigrants bearing the name Keloway or a variant listed above: Edmund Callaway who settled in Virginia in 1639; and his descendants would later become recorded as a distinguished family of the U.S.A. the history of which can be found in Burke's. Later W.M. Callaway arrived in San Francisco Cal. in 1850.