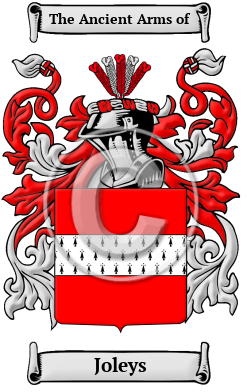 The Ancestry of the Joleys name lies with the Norman Conquest of England. This Norman name was used for a person originating in France, and was associated with the French Huguenots. This nickname surname originated with an early member who was a happy and lively person. But we must look to Normandy where the earliest records of the root name was found. As a variant of Jolliffe, it was found there as early as 1195 with N. Giolif. Three years later Robert Jolif was listed in a census in the same area of Normandy. [1]

Early Origins of the Joleys family

The surname Joleys was first found in Yorkshire where there are numerous variations of the name listed in the Yorkshire Poll Tax Rolls of 1379 including: Johannes Yoly, Agnes, servienes Joly Johnan, Henricus Joly; Ricardus Jolyman; Willelmus Jolyman and Johannes Jolyman. [2]

As confirmation of their Huguenot origin, not all of the family moved far from the English coastline. Some stayed in Cornwall as Pencoose in the parish of St. Enoder was a seat of the family of Jolly in early years. This was afterwards purchased in the reign of Charles II. by Arthur Fortescue, Esq. [4]

Early History of the Joleys family

Norman surnames are characterized by a multitude of spelling variations. The frequent changes in surnames are largely due to the fact that the Old and Middle English languages lacked definite spelling rules. The introduction of Norman French to England, as well as the official court languages of Latin and French, also had pronounced influences on the spelling of surnames. Since medieval scribes and church officials recorded names as they sounded, rather than adhering to any specific spelling rules, it was common to find the same individual referred to with different spellings. The name has been spelled Jollie, Jolley, Jolly, Jollys and others.

Notable in the family at this time was Rev. James Jollie, senior chaplain of the Church of Scotland and chaplain of St. Andrew's Church in Madras. Thomas Jollie (1629-1703) was an English Dissenter, a minister ejected for his beliefs from the Church of England. He was "born at Droylsden, near Manchester, on 14 Sept. 1629, and baptised on 29 Sept. at Gorton Chapel, then in the parish of Manchester. His father, Major James Jollie (1610-1666), was provost-marshal general of the forces in Lancashire (1642-1647), and was nominated (2 Oct. 1646) an elder for Gorton in the first or Manchester classis in the...
Another 108 words (8 lines of text) are included under the topic Early Joleys Notables in all our PDF Extended History products and printed products wherever possible.

Migration of the Joleys family to Ireland

Some of the Joleys family moved to Ireland, but this topic is not covered in this excerpt. More information about their life in Ireland is included in all our PDF Extended History products and printed products wherever possible.

Migration of the Joleys family

Many English families emigrated to North American colonies in order to escape the political chaos in Britain at this time. Unfortunately, many English families made the trip to the New World under extremely harsh conditions. Overcrowding on the ships caused the majority of the immigrants to arrive diseased, famished, and destitute from the long journey across the stormy Atlantic. Despite these hardships, many of the families prospered and went on to make invaluable contributions to the development of the cultures of the United States and Canada. Early North American immigration records have revealed a number of people bearing the name Joleys or a variant listed above: Francis Jolly, who settled in Virginia in 1648; John Jolly settled in Virginia in 1637; along with Joseph, Marjorie, Mary; David, George, Thomas and Edward Jolly all arrived in Pennsylvania between 1840 and 1860..