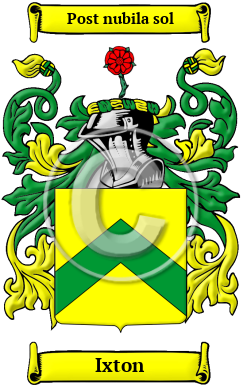 It is generally believed that the English family of this name originated in the locality 'of Punchardon' [1] while the Scottish branch originated "in the old barony of Pinkerton near Dunbar, East Lothian." [2] There is much debate about the former origin, but we include this entry for you the reader to view:

"We search in vain the Gazetteers of England and of Scotland, for any locality bearing this designation; yet the surname is local, being a corruption of the Punchardon, or Pincherdon, of the so-called Battel Abbey Roll, and the Ponte-Cardon of Domesday Book, which is derived from the place now known as Pont-Chardon, near Argentan, in Normandy. The name passed early into Scotland, and in Ragman Roll, A.D. 1296, it is written Pynkerton. It is uncommon in England, but more frequently to be met within Scotland and in the North of Ireland, to which last-named country it was introduced by Scottish colonists." [1]

Another noted source disagrees: "He declares that it is a corruption of Punchardon, and asserts that Punchardon is found as Pynkerton in Ragman Roll, A.D. 1296 (Patronymica Britannica). I doubt not he is right. It is believed that Punchardon is the place now called Pont-Chardon, in the arrondissement of Argentan, Normandy. In Domesday the surname is found as Ponte-Cardon. We may take it therefore that the family came into England at the Conquest." [3]

As to underscore this last entry, we draw your attention to: Magni Rotuli Scaccarii Normanniae which lists William and Robert de Ponte Cardun, Normandy 1180-95. "Pontcardon was near Neaufle, Normandy. Robert de Pontcardon 1083 held lands in Devon from Baldwin the Viscount (Exon. Domesd. 277, &c.) In 1165 William de Pontcardon held four fees in Devon, and two in Somerset, and Roger de Pontcardon held in Lincoln, and Matthew de Pontcardon in York or Northumberland (Lib. Niger). In 1216 the estates of Sir William Pontcardon at Aureville, Avesnes, and St. German, Roche, and Cetrentost, were granted to another by Philip Augustus, probably as an adherent of King John." [4]

Early Origins of the Ixton family

The surname Ixton was first found in East Lothian where they the first entry for the family was Nicol de Pynkertone of Haddingtonshire who rendered homage in 1296 to King Edward I of England.

Allan Pinkerton, (1819-1884) born in Gorbals, Glasgow, Scotland emigrated to America in 1842. He would go on to found the famous Pinkerton National Detective Agency in 1850 in Chicago.

Early History of the Ixton family

More information is included under the topic Early Ixton Notables in all our PDF Extended History products and printed products wherever possible.

Migration of the Ixton family to Ireland

Some of the Ixton family moved to Ireland, but this topic is not covered in this excerpt.
Another 73 words (5 lines of text) about their life in Ireland is included in all our PDF Extended History products and printed products wherever possible.

Migration of the Ixton family