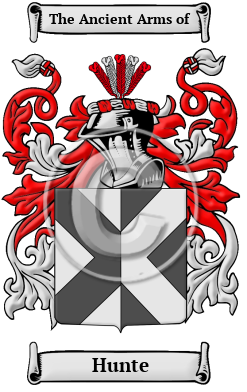 The ancient name of Hunte finds its origins with the ancient Anglo-Saxon culture of Britain. It comes from a name for a hunter. The surname Hunte is derived from the Old English word hunta, which means hunter. [1]

The name is "well distributed through England, except in the north, where its place is supplied by Hunter, which has the same signification. It is best represented in the south of England, especially in the county of Dorset, and after that in those of Wilts and Somerset." [3]

Chaucer's Canterbury Tales includes and old poem about the name "With hunte and home, and houndes him beside."

Early Origins of the Hunte family

The surname Hunte was first found in Shropshire where they held a family seat from very ancient times, some say well before the Norman Conquest and the arrival of Duke William at Hastings in 1066 A.D. Early records of the name include Humphrey le Hunte, who was in the Feat of Fines of Sussex in 1203; and Ralphe Hunte, listed in the Assize Rolls of Yorkshire of 1219. [4]

The Hundredorum Rolls of 1273 listed the following early entries for the family: Alice le Hunte in Oxfordshire; and Thomas le Hunte in Cambridgeshire. [5]

Early History of the Hunte family

Sound was what guided spelling in the essentially pre-literate Middle Ages, so one person's name was often recorded under several variations during a single lifetime. Also, before the advent of the printing press and the first dictionaries, the English language was not standardized. Therefore, spelling variations were common, even among the names of the most literate people. Known variations of the Hunte family name include Hunt, Hunter, Huntar and others.

Another 38 words (3 lines of text) are included under the topic Early Hunte Notables in all our PDF Extended History products and printed products wherever possible.

Migration of the Hunte family to Ireland

Some of the Hunte family moved to Ireland, but this topic is not covered in this excerpt.
Another 71 words (5 lines of text) about their life in Ireland is included in all our PDF Extended History products and printed products wherever possible.

Migration of the Hunte family