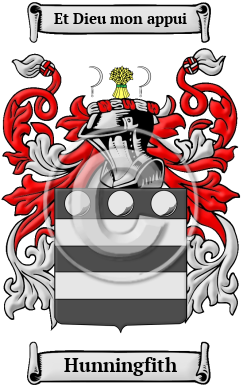 Early Origins of the Hunningfith family

The surname Hunningfith was first found in Gloucestershire at Down Ampney, a parish, in the union of Cirencester, chiefly in the hundred of Crowthorne and Minety. "The manor-house, a very interesting specimen of ancient architecture, was formerly one of the many seats of the Hungerford family, and is situated precisely on the border line of the two shires." [2]

Early History of the Hunningfith family

Hunningfith has been spelled many different ways. Before English spelling became standardized over the last few hundred years, spelling variations in names were a common occurrence. As the English language changed in the Middle Ages, absorbing pieces of Latin and French, as well as other languages, the spelling of people's names also changed considerably, even over a single lifetime. Spelling variants included: Hungerford, Hungerton, Huningford and others.

Notables of the family at this time include Thomas Hungerford, first recorded Speaker of the House of Commons (1330-1397); Walter Hungerford, 1st Baron Hungerford, Speaker of the House of Commons (1378-1449); Sir Anthony Hungerford of Black Bourton (1567-1627), a religious controversialist; Walter Hungerford, 1st Baron Hungerford of Heytesbury (1503-1540), the first Englishman to be executed for homosexuality; Anthony Hungerford of Black Bourton (c. 1607-1657), an English Member of Parliament, supported the Royalist cause during the English Civil War; Anthony Hungerford (c.1614-1657), a Colonel in the English Parliamentary...
Another 87 words (6 lines of text) are included under the topic Early Hunningfith Notables in all our PDF Extended History products and printed products wherever possible.

Migration of the Hunningfith family to Ireland

Some of the Hunningfith family moved to Ireland, but this topic is not covered in this excerpt. More information about their life in Ireland is included in all our PDF Extended History products and printed products wherever possible.

Migration of the Hunningfith family

In an attempt to escape the chaos experienced in England, many English families boarded overcrowded and diseased ships sailing for the shores of North America and other British colonies. Those families hardy enough, and lucky enough, to make the passage intact were rewarded with land and a social environment less prone to religious and political persecution. Many of these families became important contributors to the young colonies in which they settled. Early immigration and passenger lists have documented some of the first Hunningfiths to arrive on North American shores: Joan and Sarah Hungerford settled in Virginia in 1650; John Hungerton settled in Virginia in 1648; Thomas Hungerford settled in New London Conn in 1633..