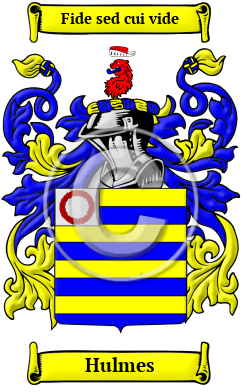 Hulmes is a name of ancient Anglo-Saxon origin and comes from the family once having lived in an area that was referred to as a holme, a slightly raised islet in a fen or partially surrounded by a stream or river. The surname Hulmes was originally derived from the Old English word Holen. [1] Another reference claims "A holme is defined by Halliwell as ' flat land; a small island; a deposit of soil at the confluence of two waters. Flat grounds near water are called holms.' " [2]

While most references claim that the name was probably Anglo-Saxon, it could very well have been Norman in origin, as William du Holme was listed in Normandy (1180-1195) and William de Homes was also listed there in the Magni Rotuli Scaccarii Normanniae in 1198. [3]

Early Origins of the Hulmes family

The surname Hulmes was first found in many counties throughout Britain. One of the earliest records of the name was Roger de Holm who was listed in 1186 in Leicestershire. A few years later, Urkel' de Holmes was listed in the Assize Rolls of Yorkshire in 1219. John atte Holme was listed in the Subsidy Rolls of 1296 in Sussex. [4]

Hulam or Holom in Durham "anciently styled Holme, which is the term used to designate it in the Boldon book, formerly belonged to a family of the same name." [5]

Early History of the Hulmes family

Sound was what guided spelling in the essentially pre-literate Middle Ages, so one person's name was often recorded under several variations during a single lifetime. Also, before the advent of the printing press and the first dictionaries, the English language was not standardized. Therefore, spelling variations were common, even among the names of the most literate people. Known variations of the Hulmes family name include Holme, Hulme, Holmes, Holms and others.

Distinguished members of the family include Randle Holme I (1570-1655), first to bear the name, main duty was arranging funerals of those entitled to bear arms; Nathaniel Holmes or Homes (1599-1678), an English Independent theologian and preacher; Randle Holme II (c1601-1659), Chester city treasurer in 1633 and clerk to the Stationers' Company of Chester in 1641; Randle Holme III (1627-1700), steward to the Stationers' Company of Chester in 1656 and an alderman from 1659...
Another 74 words (5 lines of text) are included under the topic Early Hulmes Notables in all our PDF Extended History products and printed products wherever possible.

Migration of the Hulmes family to Ireland

Some of the Hulmes family moved to Ireland, but this topic is not covered in this excerpt.
Another 89 words (6 lines of text) about their life in Ireland is included in all our PDF Extended History products and printed products wherever possible.

Hulmes migration to the United States +

For political, religious, and economic reasons, thousands of English families boarded ships for Ireland, Canada, the America colonies, and many of smaller tropical colonies in the hope of finding better lives abroad. Although the passage on the cramped, dank ships caused many to arrive in the New World diseased and starving, those families that survived the trip often went on to make valuable contributions to those new societies to which they arrived. Early immigrants bearing the Hulmes surname or a spelling variation of the name include:

Hulmes Settlers in United States in the 19th Century

Hulmes Settlers in Australia in the 19th Century