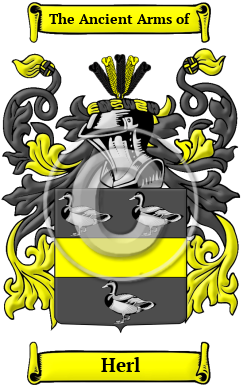 Early Origins of the Herl family

The surname Herl was first found in Northumberland where they held a family seat on the English/Scottish border. After the Norman Conquest of England many of Duke William's rebellious Barons moved north. The border became a convenient no-man's land. In the 16th century they became known as the 'unruly clans'.

The name Haurell or Harel is found several times in the Norman Exchequer Rolls of 1180-95 and subsequently appears enrolled among the nobility as Sires de Bretteville. [1]

Cornwall hold an interesting entry about the family. Lord Borchard de Herle (1268-1305), was a medieval diplomat under the King Edward I. By the time he was 12, his father Lord Borin had died of typhoid fever leaving him to care for his mother and his younger brother. As soon as he turned 18, he abandoned his sick mother and took his father's money and left to go to college at University of Cambridge. His father's legacy of close connections to Edward I led to his early career. This Cornish branch claims descent from "the house of West Hearle in Northumberland." [2]

"The manor of St. Day [in the parish of Gwennap, Cornwall] was at a very early period in severalties. The family of Hearle possess one third part, which they have long held." [3]

"East Clusion [in the parish of lansallos, Cornwall] now belongs to John Hearle, Esq. of Tregony, in whose family it has been vested about a century." [3]

In nearby Devon, "Sir William Herle, Chief Justice of the Common Pleas, 1316, certainly lived at Chambercombe, near Ilfracombe, but his birth there is doubtful. " [4]

Early History of the Herl family

During the era when a person's name, tribe and posterity was one of his most important possessions, many different spellings were found in the archives examined. Herl occurred in many references, and spelling variations of the name found included Herle, Hearle, Herral, Harrell, Harle, Harel, Heral, Hurl, Hirl, Herrel and many more.

Notable amongst the family name during their early history was William de Herle (d. 1347), was an English judge, son of Robert de Herle, was probably born in Leicestershire, since both his father and he in 1301 and 1324 respectively were summoned by the sheriffs of that county to perform military duty and to attend the great council at Westminster. His lands lay principally in Leicestershire, but through his wife Margaret, daughter and heir of William Polglas and of Elizabeth, heiress of Sir William Champernon, he came into possession of considerable estates in Devonshire. [5] Charles Herle (1598-1659), was a prominent...
Another 101 words (7 lines of text) are included under the topic Early Herl Notables in all our PDF Extended History products and printed products wherever possible.

Migration of the Herl family

Gradually becoming disenchanted with life in Ireland many of these uprooted families sailed aboard the armada of sailing ships known as the "White Sails" which plied the stormy Atlantic. These overcrowded ships often arrived with only 60 to 70% of their original passenger list, many dying of illness and the elements, were buried at sea. In North America, early immigrants bearing the family name Herl, or a spelling variation of the surname include: Michael Herrel, who was naturalized in Mobile Co. AL in 1868; and John Herle, who was recorded in the census of Ontario in 1871.