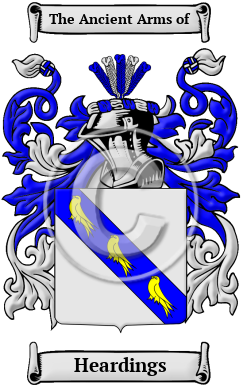 The roots of the Heardings name go back to the ancient Vikings and their Old Norse language. Heardings was a name for a hard working or arduous person, deriving its origin from name the Old French word hearding, which meant hard. [1]

Early Origins of the Heardings family

The surname Heardings was first found in Bristol, where the first record of the family was Harding of Bristol (c.1048-1125), Sheriff Reeve of Bristol. He was the son of Eadnoth the Constable (died 1068), an Anglo-Saxon thane who served as steward to Edward the Confessor and Harold II. One of the Harding of Bristol's sons was Robert Fitzharding (c. 1095-1170), 1st feudal Baron of Berkeley, Gloucestershire, an Anglo-Saxon nobleman who was granted the feudal barony of Berkeley in Gloucestershire and was ancestor of the Berkeley family of Berkeley Castle.

Early History of the Heardings family

Spelling variations are extremely common among Scottish names dating from this era because the arts of spelling and translation were not yet standardized. Spelling was done by sound, and translation from Gaelic to English was generally quite careless. In different records, Heardings has been spelled Harding, Hardinge and others.

Notable amongst the Clan from early times was Thomas Harding (1516-1572), an English Roman Catholic priest and controversialist, born at Beckington, Somersetshire. [3] Richard Hardinge (c.1593-1658), was a Groom to the Bedchamber to the then Prince of Wales; George Harding, 8th Baron Berkeley (1601-1658), was an English nobleman; and Thomas Harding, was a 16th century English religious dissident. Thomas Harding (d. 1648), was an English historian...
Another 63 words (4 lines of text) are included under the topic Early Heardings Notables in all our PDF Extended History products and printed products wherever possible.

Migration of the Heardings family to Ireland

Some of the Heardings family moved to Ireland, but this topic is not covered in this excerpt.
Another 40 words (3 lines of text) about their life in Ireland is included in all our PDF Extended History products and printed products wherever possible.

Migration of the Heardings family

Those who made the voyage were greeted with ample opportunity to acquire land and a political climate far away from the oppressive monarchy of the old country. They settled along the east coast of what would become Canada and the United States. In the American War of Independence, those who remained loyal to England traveled north to Canada as United Empire Loyalists. In this century, many Scots living in North America have begun to recover their rich heritage through festivals, highland games, and Clan societies. An examination of passenger and immigration lists has shown early immigrants bearing the name Heardings: Robert Harding who sailed to Boston Massachusetts in 1630; he was a Freeman and Captain of Artillery. In Newfoundland, William Harding, born in Bedford, England. An alleged deserter from the Battle of Waterloo, he settled in Collins Cove in the 19th century.